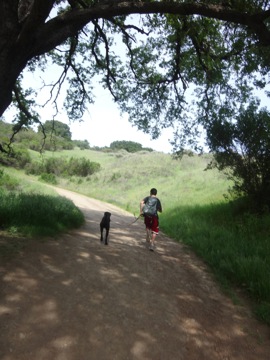 Debb, one of my dear bloggies (that’s how I refer to you all) sent me a group photo of her and her hubby at their yoga class. She said that they’d been practicing yoga three times a week for over 1 1/2 years and experiencing great benefits physically and mentally. She said it was a nice compliment to her running and that there was even a couple of BQ’s had in this same timeframe.

Her email came on a particularly tough day when my pain was at peak performance. In my reply, I told her that I loved yoga but that I missed being able to run freely and easily as I did prior to the overuse injury that came with completing the B2BS Challenge and subsequent struggles with my back. Then, I told her that “I’m holding onto hope. Every day is a new day.”

After writing my response to her, I got dressed in my running attire and drove to nearby trails for a hike. When I started feeling discomfort building, I slowed to a stop, and ran through a Sun Salutation (just to see if it would help). Much to my delight, I found that indeed, it helped. And so I continued for about 3 1/2 miles.

The following day, I invited YaYa to come along. We took the dogs and set off for the trails. It was a beautiful, cool but sunny day to be outside. YaYa, who reminds me a lot of myself at times, broke into a run on several occasions during the hike. The bursts didn’t last very long so t decided to give it a go. I was thrilled to discover that it actually felt okay.

We continued to jack-rabbit along the 5 mile trek stopping periodically to offer the dogs water. It was a very low key way to reverse (or invert) the fear I’d developed about running. 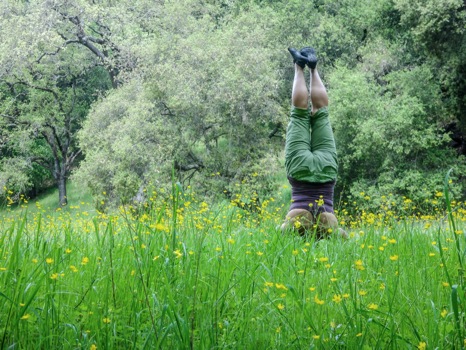 Indeed, every day *is* a new day. On this day, I felt so good, I decided to break out a headstand (aka an inversion) in the middle of the wildflowers to celebrate.