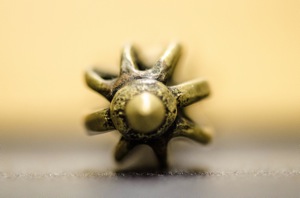 This little metal figure is called a vajra, or dorje in Tibetan rituals. I picked mine up in Dharamsala after being drawn to the one hanging from my teacher’s neck. In sanskrit, vajra means both diamond and thunderbolt. The symbolic ritual object represents the properties of the diamond’s indestructibility, and the thunderbolt’s irresistible force. It is often used during ceremonies, as I saw first-hand during the mandala building and deconstruction earlier this year.

Mine is a double dorje, or vishvavajra. The two connected dories form a cross and represent the foundation in the physical world. And although the one I picked up in Dharamsala is too big to hand on my neck, as I first envisioned, it serves to remind me on a regular basis to be grounded, rather than flighty, in my daily activities.