There are times, MANY times, when your fight for something you want seems futile. You fight harder, giving it all you’ve got, and still don’t see the results you desire. Maybe, you get down on yourself — have a pity party of sorts — but you know you must not let yourself stay in that state for very long. You will lose ground and eventually lose the fight if you do. 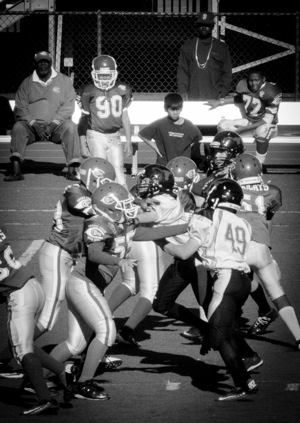 In these past many weeks, YaYa has been fighting on two playing fields at the same time. On the football field, he has taken position on the front lines week after week, trying to defend his teammates, and guard them as they move down the field. It’s not an easy task, or so I am told. He gets hit from all sides, and called names — sometimes, to no avail. His team barely made it to the playoffs.

Quite honestly, I wish they hadn’t. But that’s just me.

On one hand, I respect the hard work all of the kids have put forth to this end. On the other, I respect the fact that players are dropping like flies to injuries and fallen grades. We fighting this fight with limited resources and I worry about everyone’s safety.

Meanwhile, YaYa fight to get all of his grades to a respectable level is also being compromised. His stepping up on the football field has tapped his energies in the worst way. He takes on his homework in an overly exhausted state. But, thankfully, he keeps lining up to fight here too.

At home, I am the coach and the water girl. At least that is what I tell myself as I try to re-learn the forgotten material and guide him in the best mode of attack. I bring him replenishments and encourage him to rest when needed.

Sometimes, I steer him wrong. Take this past weekend, for example, when I helped him learn all of the key terms and basic principles in his science chapters only to have him fail miserably the following day. It seems the test was on a list of elements and their atomic symbols which was somewhere in his backpack. *sigh*

It’s enough to make you sick to your stomach. This is exactly what YaYa has been working through for the past couple of weeks. Stomachaches and headaches, insomnia and futility.

I knew nothing of the “list”… then. Fortunately, I did on Thursday. We were at-the-ready on Friday — or at least better prepared than before. Although he went to school with a stomachache, he came out ahead on the test.

Of course, the fight continues; he has about a week left in the trimester. A week to dig deep and find whatever he has left and leave it all out there — hopefully, with nothing less than C+.

Today, however, he’s back on the line and I get to step back from being the coach & water girl and simply be Mom. I cheer with all my heart and pray with all my might that everything will be right in the end.