We were 5 or 6 miles down the trail when we came upon a sign noting a mere 13 miles to Roads End. The descent, despite my uneasiness with footing on the downhill, was going remarkably well and even I was finding a grove. We’d not planned to end the trip for another day yet, each of us felt a sore throat coming on and did not want illness to prevent us from returning to work as planned. So we weighed the pros and cons of ending a day early over the next few miles. 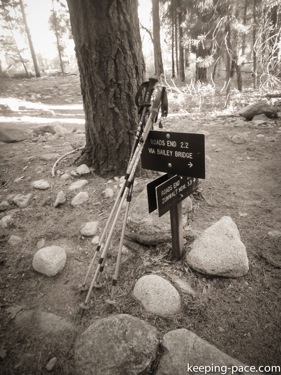 I was torn. I didn’t want it to end. Not yet. There was so much beauty to take in, and I had yet to see my bear. Still, my throat was raw — more so than just from mouth breathing, as I had been telling myself over that past couple of days.

Once again, I was reminded to be in the moment, taking it all in as if it were my last day to appreciate the beautiful life that I have been given. This thought seemed to be the theme of the trip for me. It is how I try to live my life yet frequently forgotten in spite of my good intentions.

So we powered on but stopped frequently for pictures or simply to oo and ah. Just before sunset, we arrived back at Roads End: the trail now ending and the road back to civilization starting once more.