Lil Yelp is back in town — visiting us for the summer.  He is bigger than life and filled twice the energy.

He arrived with a bang; dropped off by a young woman and her little girl who seemed overwhelmed and a little too eager to get rid of him. The conversation went something like this:

“Um. It might be easier if I let him out of the crate and then lift if off. Are you ready for him?”

“Good luck with THAT!”

“What? She (BoBo’s girlfriend) said he sits, stays, comes, and is potty trained.”

I had no choice in the matter. I had to accept him AND I had to let him in my house.

I grabbed the leash with the BIG bad pup and tried to guide him towards my house. He entered, met by Ronin, and proceeded to move wildly around the house, crashing into walls, and people and things — with Ronin following behind. OUT! I yelled, and pointed outside. Ronin obeyed and, miraculously, his new friend followed.

But moments later he was back, jumping up on his hind legs, and beating the door with his paws demanding to be let in. After a few useless commands of “No,” I looked at theMan in complete and utter exasperation. Then I grabbed my glass of water from the table and threw it in his face (accidentally hitting his jowls in the process). He wasn’t phased. The door shut again as I tried to collect myself.

After a bit, I stepped outside, firmly gave the verbal command for the boys to SIT along with the hand signal. Ronin obeyed but our new friend resisted. I grabbed his collar, repeated the command, and pushed down on his rearend. He resisted but then gave in…for a couple seconds. “Sit!” I repeated. He looked up at me, sat, then bounced back up. “SIT!” Again, he sat. “STAY!” I commanded with the accompanying hand signal. He looked up from his seat, whined, but stayed put trying to contain his excitement. Slowly I opened the glass door, keeping my hand held with the stay command showing. Both dogs sat eagerly awaiting the “okay” to come in. 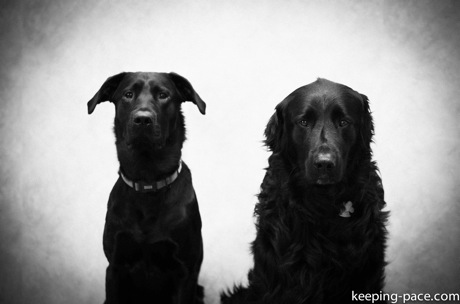 Satisfied to have won the 1st of the alpha face-offs, I let them in with an “Okay.” I’ve no doubt there will be more.