“Sometimes you have to get lost in order to find yourself.”

Indeed, that was the case for me today. I snuck out of the office for a lunchtime trail run. My favorite open space is quite close to the office and I figured, as long as I didn’t get carried away, I’d be good. I selected a 4.5 mile route: shaded with an eight switchback ascent. The perfect distance and climb for a lunchtime getaway.

Moving along at a nice clip, I waved at everyone I passed, and enjoyed just getting out. There was a hint of familiarity in doing this; a bit of the longtime runner in me emerging. The weather was cool and perfect for running. The sights and sounds, simply delicious. Kids playing by the water, birds chirping, trees swaying. I was in heaven.

By the time I hit the first of the switchbacks, I was warming up quite nicely. It was kind of early for me to be warm already; normally it 30-40 minutes to rid myself of that stale feeling. From my vantage point, I was huffing and puffing a bit but essentially felt unphased by it. I tried to be all zen about my noisy breathing so as not get fixated on what it could mean in terms of my upcoming event. No sense in premature worry. There was still 1+ weeks to do that.

My breathing must not have been as loud as I thought, for when I passed a couple catching their breath midway up the switchbacks, they both jumped when I said “hello.” I apologized for scaring them and carried on thinking how it has been far too long since I’ve run this trail. Its simplicity is breathtaking — though, thankfully, not to the point of having to stop.

Somewhere along the way, I lost track of the number of switchbacks covered. It felt like the end was near, and indeed it was. Before I knew it, I’d reached the top. Glancing at my watch, I decided that I could run the route as planned, rather than cutting it short. This made me smile as my normal route makes for a far nicer run.  The gentler descent is easier on the body and I can’t risk of frying my legs before this weekend’s planned 16 mile long run. Even still, I found myself at the bottom of the hill way before I was ready to return to civilization.

Opting for the bypass trial, I veered right and continued up the hill. I looked different from the last time I’d run it, but there was active tree thinning in process so that made sense. It wasn’t until I’d run another 20 minutes or so that I realized I wasn’t on the bypass trail after all. I wasn’t quite sure what trail I was on. 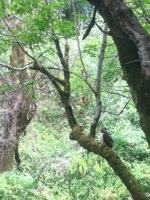 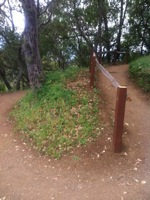 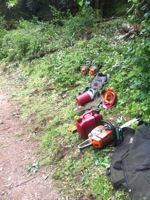 Honestly, it didn’t much matter at that point. Except for the fact that it was a work day, I wasn’t in any hurry to get back. In fact, sometime back I noticed a change. There was a renewed spring in my step, a knowingness in my sense of direction (even though I was on a another trial, I was heading in the direction of my car — the long way), and an ease in my being. It seems that, by getting lost, I found myself.