YaYa opened his eyes after making a wish and sent dandelion fluff flying with a few breaths. He then informed me that he had wished that I would have the “best Mother’s Day ever.” He had made this wish a reality way before dedicating his wish on me.

We were out on a 5-mile hike, just him and me. It was what I wanted to make my day special and he was more than willing to comply with my request. The bicycling around the neighborhood, that occurred beforehand, served as bonus bonding. YaYa will be inheriting my old Bianchi, at least until he outgrows it, and the road trip served to orient him to shifting and toe clips. Much like when I first taught him to ride a bike, the feel-good emotion that accompanied seeing him improve his cycling skills was fabulous. I would have been happy if our bonding time ended with the ride but, of course was thrilled to have more time together.

After a week away at Science Camp, there was much to be shared. YaYa told me about his week and I told him about mine. We drank up the beauty and ate up the challenge of each ascent. Oh, and we laughed with disgust when he learned that our flat-coat retriever was no different than the others in his breed – known for their “appetite” for fecal matter.

We took our time, walking a bit before stopping to photograph the flowers, bugs, and lizards. We took turns balancing on waterlogged wood and skipping rocks. In doing so, we each took turns marveling at the other, noting how each of us possess talents different from the other. As we went, we passed other hiking groups on their own Mother’s Day outings – many with children (ranging from toddler to teens) kicking a screaming the entire way. This served to highlight how lucky I am to have a son who actually wants to spend time with me.

Truly I am blessed for I have a son who cares enough to wish on flying dandelion fluff that I will have the best Mother’s Day ever. Because of his good wishes and well-intended actions, it was indeed the best. 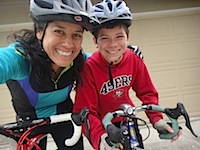 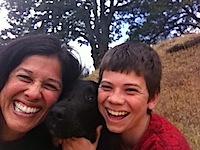