The wind was miserably COLD as me and 20+ thousand other runners waited for our race to start. My nerves were getting the better of me as I wondered if the increased downhill would do me in. I tried to quell the apprehension with the reminder that I would take it easy and savor the race. But, I couldn’t help but question whether I was prepared for this race or not.

After dropping off my bag, I joined the crowd and we walked toward the start. Although it remained blisteringly cold, the sun shone bright and energy was high. I held back my tears as I thought about what a long journey it has been to get here. Approaching the start, I looked all around me. Along side, in front, and behind were runners from all over the world. Lining the course on either side was a sea of spectators. They were hootin’ and hollering for us!

My eyes began to well up again, and once again, I pushed back the emotion. It would not be the last time I’d hold back the flood of emotion. This occurred many times along the course.

Reflecting on all that I’ve been through in the past 9 years. A combination of good, bad, and ugly…a new home, numerous injuries, and dying loved ones. And through it all, I somehow managed to continue on.

The heat from the sun and the warmth of the spectators helped me leave the chilly feeling of the morning behind. The tearfulness continued to pop up here and there: In the scream tunnel of Wellesley, while leaving the hills of Newton, when the famed CITCO sign came into view, and as I made the final turn onto the straightaway to the finish. Different from the tears of marathons’ past, these tears, brought on by the cheer of the crowd, were tears of a different kind.

END_OF_DOCUMENT_TOKEN_TO_BE_REPLACED

It was a last minute decision to check out the weekly run event put on by my favorite local running store. Opting to that take YaYa along was even more last minute. Fortunately, he adopted a why-not attitude to the invite. In no time, we were changed and on our way. I promised YaYa that I would not abandon him. I needed to run short and “easy” as I didn’t want to jeopardize my plans for the Boston to Big Sur Challenge.

After assuring him that if he could only run 2 miles that this would be fine we fell in line with the other runners. While I was making a new friend named Lauren, YaYa was picking up speed. I wasn’t worried though. There were plenty of other runners in the group who were planning to turn around at the bridge as I had planned.

Unfortunately, those runners who were turning back at the bridge, passed us on the return without YaYa. One yelled out, “your son is FAST!” Yeah, apparently he passed them before they turned back. So now I was between 1/4 to 1/2 mile behind him and he was not showing any signed of slowing or tiring. Not only was I not thrilled about the prospect of having to chase him down, it was pretty unlikely that I’d be able to catch him. Thankfully Lauren, who not too long ago ran track in college, agreed to chase him down.

On the return trip, I asked YaYa to stick closer to us so that we would not have to chase after him again and so we wouldn’t miss the trail exit. That was the hope. However, in essence, we were still chasing after him as he had a nice clip going. We also missed the exit and had to run an extra mile on the street to get back to where we started.

My GPS read close to 5 miles by the time we hooked up with the rest of the folks — who had a head start on the free appetizers and beer. Amazingly, for someone who didn’t even know if he could run 2 miles, YaYa sure seemed to have quite a bit left in the tank at the end of the run. He soaked up the positive strokes and is eager to return for more next week.

Next time, YaYa will be hooked up with someone who runs his pace. More than likely, this will be none other than the son of the store owners — who both have a long history of Boston Qualifying marathon finishes (read: fast twitch muscles on both sides of the chromosomal tree). In addition, I will be sure to communicate ahead of time the turnaround and trail exit. 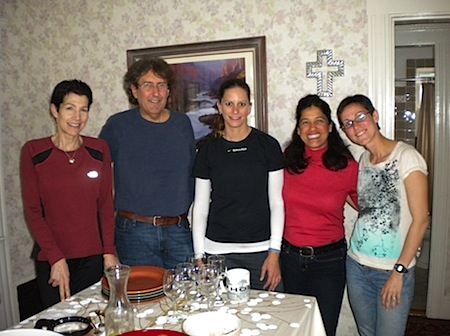 I’ve always wanted to play an instrument. Piano, guitar, and violin are just a few of the musical instruments that have enticed me over the years. Until recently, however, my want was never enough to take the next baby step of signing up for lessons. I’m not sure why. Perhaps, I just didn’t want to find out that I wasn’t any good.

Until January. This was when I received an email regarding a few short courses available through the local community college. I’m on their mailing list because YaYa’s summer school was booked through them. I clicked on the link and found a beginning acoustic class. Better yet, it was one which YaYa and I could take together.

I signed up, then struggled to make the lessons fit into our busy schedule. We are currently in the 2nd session and my young boy is really making progress. I wish I could say the same about myself but, sadly, that is not the case. I SUCK! But I am not giving up. 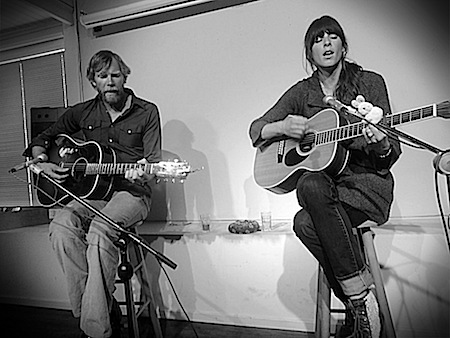 This weekend, I found myself front and center at another awesome music event. The couple, Tim & Nicki Bluhm, are so amazing that the thought of fitting in a last minute drive to the city on Easter Sunday was without question the right thing to do. I emailed to see if the venue was kid-friendly and, upon receiving the confirmation, requested the tickets.

So there I was, watching the two strum and pick at their guitars. They made it look so easy and sound so beautiful. Of course, the additional component of their voices makes for a performance so amazing that I was left wiping tears from my cheeks several times throughout their performance.

I know what you’re thinking. It’s true; I do cry a lot.

After the tears were dried, I went home inspired to step up my efforts in learning this craft called guitar playing. I brought the guitar from the family room into my bedroom. The hope was that even a few extra minutes of practice before falling off to sleep it will surely help. Every little bit helps. Right? Did I mention that I suck?

END_OF_DOCUMENT_TOKEN_TO_BE_REPLACED

With one week ’till I toe the line for my 2nd marathon in < 2 weeks, I slipped out for a 5 mile trail run. It wasn’t more than a 1/4 mile into the run when I experienced an overwhelming urge to scream. I huffed and puffed as I climbed the 1st hill, which occurred prior to my body fully warming up. I was quickly distracted from my breathlessness  as I glanced all around at the beauty.

I would judge this, and the many hills that followed, as bigger than the biggest of the famed hills of Newton but smaller than the hills I’ve yet to tackle on the Big Sur course. Although their arrival caused me to increase my rate of breathing, my body did not seem alarmed in Boston or today. It knew what to do and did it time and time again. And I could not be more pleased.

Throughout today’s run, I scanned my body for cries for help, but only heard yelps of joy. After all of the challenges with illness and injury in this past training season, I cannot find the words to express how thrilled I am with how strong my body felt while running the Boston Marathon. Moreover, I am beyond speechless in describing how amazed and pleased I am with the way it has recovered.

I can only guess that I must be doing something right. Whatever that something is, I must keep on doing it so that I can continue to do this awesome thing called running. Oh, the joy of running. I LOVE it!