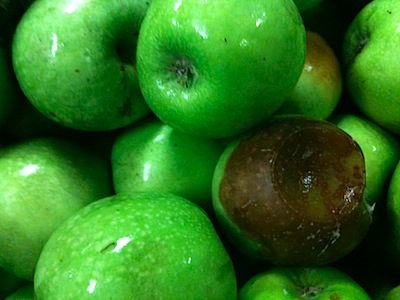 Tonight, BoBo and I joined a group from my work for a volunteering opportunity to sort food at the food bank. Unlike our previous visit, on this night, there were several other companies on hand to do the job.

The head elf hollered out instructions. They had two projects: food drive sorting and apple sorting. Having the joy of sorting oranges last time, I began sending my wish to NOT sort apples out into the universe. Please not apples, please… The first group was another company, but the second was ours. *sigh*

The group of us were lead through the warehouse and into a room in the back. Here, there were a half dozen rather large boxes of apples. Each of us gloved up, gathered around the sides of the box, and filled 3 pound bags with the good (or marginally good) apples.

There were a lot of not-so-good apples, and a significant amount of bad apples. The definition of bad apple had to be redefined for BoBo so as not to have every apple in the box thrown into the discard bin. After a while, that same process needed to be driven through our own heads for the very same reason. Bruised apples were fine, or so we were told, but apples where the skin was broken were not.

At the end of the night, the stats were announced. Collectively, our group had managed to sort 2,580 bags of relatively good apples leaving a very large plastic box full of the less desirable. Not bad for 2 hours worth of work, eh?