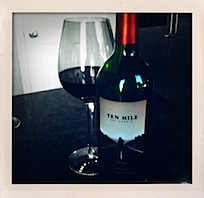 What can I say? Sometimes I let my mind get the best of me. Today, was one of those times.

As usual, I didn’t prepare for my long run ahead of time. Instead, I fell asleep on the couch right after dinner — an early dinner. You would think that getting so much sleep would leave me refreshed and ready for anything. It didn’t.

Fueled with coffee and oatmeal, I quickly dressed and began gathering my gear. Ms. Garminia was charged. I had 2 packets of GU. But WHERE was my CamelBak? I searched the usual places and finally remembered that I’d left it in the oddest place. On inspection, the tube and bite piece beyond “ew” and in need of cleaning. This meant a further delay out the door. I was NOT happy.

I left a note reminding YaYa where I was, got the FEROCIOUS guard dogs riled up, set my forcefield on KILL mode, and LOCKED up the house. And then, I was off and running…

Almost immediately, my mind began to question YaYa’s safety. What-if’s took residence in my mind until I felt that I must turn back. I glanced at Ms. Garminia. She shook her head.  You’ve only gone 1.5 miles,” she screamed. Reluctantly, I continued on.

It’s been a while since I’ve run the local sidewalks around my house. The late departure meant that there were many cars on the road — which meant that I encountered many stop lights. I don’t like running on the sidewalks or the streets around home. It’s just not fun.

I was about 3 miles out when a police car when whooshing past. It was immediately followed by another and both were going the direction of my house. Of course. There isn’t any other direction to go. I stopped right where I was and dialed home. There was no answer because YaYa was asleep. Of course he was asleep; I pulled the shades, and set the hepa filter for background noise. There was no way he was waking up.

The what-if’s were now dancing in my head and singing a song too. I turned back towards home. I looked in the coffee shop parking lot for the police cars which were not there. It was evident that I would not be able to silence the what-if’s until I could see for myself that all was well back at home.

Of course, all was well at home. I knew this as soon as I entered my silent house. Moments later, I heard YaYa flushing the toilet and coming down the stairs to see what was for breakfast.

I cooked up a spinach, tomato, avocado scramble (the new favorite in our house) and sat down with YaYa to visit. Then, I leashed up Ronin and took him out. It was about the time that I began entertaining thoughts of him as a running partner that he began dragging his feet and tail. We hadn’t even gone 2 miles. *sigh* I dragged him home.

After dropping of the dog, I set out for the final 2 miles, thinking that today’s 10 mile run was one of my longest, and most fatiguing yet. A short time later, I took a 3 hour nap.