Driving home from the vet, the conversation about my loyal old dog played in my head. As we drove past the BevMo, I wanted nothing more than to stop in for a bottle of red. Listening the the noisy breaking beside me, I drove past. 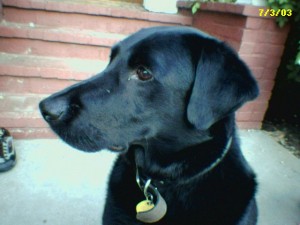 We rescued this dog when he was 5 years old. In the pound, he was the saddest looking thing. I almost didn’t take the time to wait to see him. At the time, I wanted a dog that would be able to keep up with our active family. I wanted a dog that would retrieve (BoBo) my 10 year old son’s pitches, accompany me on runs, and tolerate (YaYa) my 3 year old’s tendency towards over-loving (if there is such a thing).

We waited for over 2 hours for the chance to get up close and personal with this dog. As it turned out, this dog (named Lucky) seemed to have lived a not-so-lucky life. But even though he was a retriever that did not retrieve, his luck changed that day.

As I see it, our luck changed too that day. Lucky turned out to be a fabulous running dog, a loyal friend, and a loving companion for the boys. As for his sad appearance, that lasted about as long as it took for him to realize that he was going home with us. He perked right up.

For many years we enjoyed that perky dog. It’s only been the last few years when I’ve noticed the toll of time. He’s getting old, this dog, very OLD. 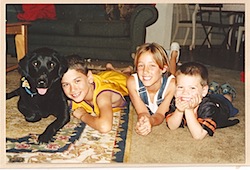 I can’t remember exactly when I noticed Lucky’s tendency towards Darth Vader like breathing. Memory tells me that it started around the time of my treadmill accident. It wasn’t often at first, but now it’s frequency has increased considerably.

He doesn’t always breath this way. It’s only when he is excited: when I come home, every morning when I wake him up to go outside, when I say, or spell, the word “walk.” Lately, I’ve noticed that he also breathes heavy when he exerts energy for activities such as going up the stairs, or going for short (very short) walks in the neighborhood.

I guess I knew deep down that this raspy breathing was the beginning of the end. I admit I avoided taking him to the vet. I did not want to have to defend my position that, in spite of how much I deeply love this dog, I am not willing to subject him (or me) to endless medical procedures that may extend his life for some unknown period of time. This dog has already lived beyond his life expectancy and I cannot afford it financially, or emotionally.

But, I did take him to the vet.

I wasn’t at all surprised to hear what I had already suspected. Lucky’s condition was not good. I was told that there was a surgery available to open his paralyzed tracheal cords. It was not always successful and often led to multiple cases of aspiration pneumonia. On top of that, my dog was probably not strong enough to handle the anesthesia. I shook my head through the entire discussion. Then I asked what could be done.

I was told to remove his collar and use only a harness to take him out. But I was also told to avoid exercise, not get him excited, and protect him from the heat.

I asked for the natural progression of the disease, and when I would know enough was enough. I was told that when the raspy Darth Vader like breathing was occurring more often than not, that this would be a sign to look for. The doctor continued, describing the noisy breathing as “suffering” for the first time in the conversation. Tears began to stream down my face in hearing this. 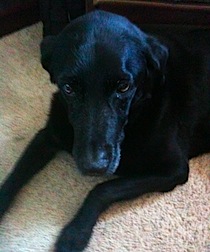 Suffering? It had never occurred to me that my dog, who greets me with his tail wagging wildly but is breathing noisily was suffering. What kind of dog owner have I been?

The thoughts that ran through my head as my dog and drove home, him breathing noisily the ENTIRE WAY, was painful. I wondered if he suffered all day long: outside in the heat, with the 2 year old Ronin constantly bouncing beside him. I wondered if now was the time to put him down. And then, I thought of YaYa.

Every time YaYa encounters death, be it book, movie, or personal experience, he is faced with his mortality like no 10 year old should have to. He cries at night, “I don’t want to die.” Thinking of YaYa made me cry even more.

I was so torn. If now is the time, and I am not convinced that it is, what is the best way to prepare YaYa? Is it better to tell him that Lucky is getting medicine to help him die or is better not to? If I don’t tell him the whole truth, what do I tell him? I know my YaYa, who needed to see his Dad’s body after the death, will want to say good bye to his dog? What do I do?

I moved his crate into my room, thinking that it was best to make the best of his last days, weeks, or months. I got next to NO SLEEP whatsoever but he seemed to and his breathing sounds just fine today. He isn’t doing much of anything but his breathing is nice and quiet.