I’ve made quilts in the past but, truthfully, I am not much of a quilter. I was pretty apprehensive about participating in the running-themed quilting round robin. Ultimately, after Brit’s coaxing but gentle emails, I did agree. 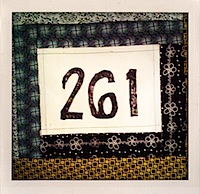 I spent the majority of May in search of an idea for my block. I wanted something that would talk to my quest for Boston — which ultimately has served as a symbol for persevering against the many challenges that life hands you. Of course, given my limited sewing prowess, it had to be simple.

After much thought, I set my sights on creating a block with a simple race bib as the center point. I think I will add pins to the corners when it is finally done. As for the number I chose, #261 is simply the number which Katherine Switzer wore in 1967 when she paved the way for women in marathoning. Katherine’s refusal to drop from the race showed the world that women are not fragile. Seriously, doesn’t childbirth alone show how strong we are. Nonetheless, #261 is symbolic of not only my determination to achieve Boston qualification but also the determination and strength which I have discovered following my husband’s death. 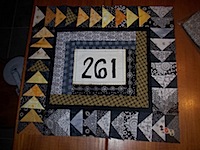 Mia had my block in June. I love what she’s done to it. It now looks like this.

As for Brit’s block, which I received mid-month thanks to her spaz of a postwoman. Once more, I spent nearly all of the month in search of some magnificent plan for it. Unfortunately, or perhaps fortunately, magnificent is not me. Simplistic is me. Given my limited sewing ability, it was good that the only idea entering my head was to extend her creation by adding fabric to highlight the change from sky, to trail, to nature. 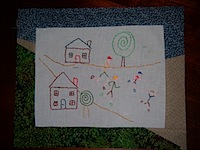 This is how it came out. Although, my initial feeling was that I had to add something fancier to it, I am now glad that it didn’t. Mia, who will receive it next, has grande plans for it which she shared with me via email. I cannot wait to see how it turns out because if does sound perfectly “Brit.”

Soon, I will be receiving another block. This one, the creation of a perfect stranger who, I must say had no idea who she is trusting her quilt with. Like in June, I am sure that I will pull out a whole lot more hair trying to come up with a way to add to it, while not ruining it.