Do you remember the scene in Disney’s Ratatouille where the old lady shoots her rifle at her ceiling one too many times? Her ceiling, completely destroyed, falls to the ground and 1000’s of rats come down with it. I watched the scene at the end of the Family Day and shuddered in thinking of the scratching noises that had been coming from my own ceiling. One rat or a 1000, it was still too many. 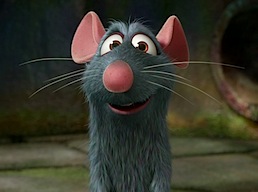 Of course, it didn’t take a lot to notice my reaction. W and my friend, Mark, picked up on it right away. Which quickly lead to a little teasing…and a little more….and a little too much. Then W felt bad — even though it was Mark who went over board.

The next day, W called up his critter catching buddy and was soon introducing him to me and my problem. He listened as I described the scratching noises, where they came from, and when I’d heard them last. YaYa joined in as well, describing how I stood on the desk, banging the ceiling with a book, and yelling. W and Mr. Critter Catcher just smiled at me. Soon after, the screens around the bottom of my house were getting recovered, and my attic was being explored. Mr. Critter Catcher left three traps and promised to return in 1 week to check them (unless I called sooner).