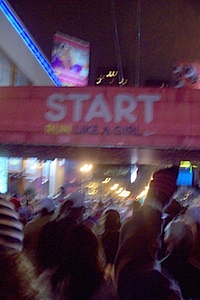 The Nike Women’s marathon is very unique. Although the race offers amenities which I personally find somewhat insulting to me as a female athlete (pedicures along the way, massages at the expotique), Nike offers a course which more than makes up for it by validating the toughness (buried under all that pretty) of female athletes. The course is hilly and, this year, made even more challenging than in previous years. It kicked my butt but I did not go down without a fight.

The Nike Women’s marathon is very unique. Although the race offers amenities which I personally find somewhat insulting to me as a female athlete (pedicures along the way, massages at the expotique), Nike offers a course which more than makes up for it by validating the toughness (buried under all that pretty) of female athletes. The course is hilly and, this year, made even more challenging than in previous years. It kicked my butt but I did not go down without a fight.

I was up before 4 AM to eat, dress, and board a bus to the starting line. I felt like an elite runner as I entered a nearly empty corral right at the front of the playing field. From there I quickly made friends as I chatted with the other women in the 6:30 – 8:59 minute/mile corral. There was plenty of time to be nervous and contemplate the day ahead.

It was a short text message, received as I stood in the darkness of the morning that set the stage for the day. “Leave it all on the track” it said. That was all it took to push my decision on how to attack the day. Rather than my previous thoughts of running conservatively for the first half, I changed my focus. From the very first mile, I would run with the intention of leaving it ALL on the course. In this way, I would have no regrets when the day was done.

Of course this was easier said than done. By mile 3, I was already feeling fatigue setting in. I wondered if I was leaving too much in the first half of the course. I began to evaluate the numbers and determined that my pace was not in an unreasonable range. I continued to plug away and began thinking of our honorees and the physical pain which they have endured. I ran past the coaches and our team manager and gave a wave of gratitude. It was a great feeling to see them sitting back and watching us run our race.

At mile 7, Coach Tim and Coach Kris each joined up with us as we ascended one of the tougher hills. Patty, a cancer survivor, ran side by side with me for a bit. I was inspired to see her tackling the hills with us. Her story is just one of many who have fought the battle, but know that they will have to fight it again sometime in the future. Patty’s struggle on the course was minor compared to all that she has overcome. I left her to her journey and continued on my own.

As I got closer to mile 11, I began looking forward to seeing my YaYa. I rolled downhill smiling in anticipation of seeing his smiling face and gave five to a row of little hands lining the course. My sister and her family also hoped to be out for support and would possibly run a few miles with me.

As I turned toward the windmill, I stopped to say hello to my mentors (Corina & Troy) and then began looking for YaYa. Unfortunately, he was no where to be seen. It was crowded, so I figured that the family who he was hanging out with probably had difficulty getting there on time. As the course turned into Golden Gate Park, I pushed away the disappointment and kept moving.

The half marathoners turned off and the marathoners continued up a gradual hill. This was where it became clear that, of the 20,000 who toed the line, there were very few going the FULL distance. Although I had more room to maneuver, the change in the playing field made the race more of a challenge mentally. I stuck with it, thinking only of the likelihood that I might see YaYa around mile 15. I tried to pick up the pace a little as the half-marathon timing mats came into view.

The course did not turn back toward the Great Highway at the half-marathon check point as I had hoped. It continued into the park for quite a distance before the turn around. I watched the runners ahead of me pass by on the other side and hoped that I would soon be making my way down the hill too.

Thankfully, I didn’t have to wait too long.

Around mile 15, I saw Doug and Jack (more honoree cancer survivors), but I still did not see YaYa. I scanned the spectators lining the return to the Great Highway. Visually, this made me a little dizzy. As much as I tried not to be saddened by his absence, I was. I kept reminding myself that YaYa was on the race course somewhere, and reminded myself that he was there for me.

After the turn, the race continued in a constant yet gradual uphill. I passed a man who was telling the runners that it was “all downhill from here.” I responded by pointing out the obvious, “We are going uphill now.” He just shrugged his shoulders.

The course continued past the zoo and towards Lake Merced. I began looking for YaYa and my sister on both sides of the road, but neither were in sight.

I plugged on and tried to shake the feeling of being all alone in a crowd. Indeed, I was not alone; I was there with 20,000 other runners (4,900 would go the full 26.2 miles). These thoughts only took me so far though. The hard part was still to come.

Hitting the “wall” in marathon running usually occurs around mile 20. This phenomenon occurs when the athlete runs out of glycogen stores and begins to use fat reserves as a fuel source. A typical athlete can store up to 7500kJ of glycogen in the liver and muscles. Assuming average energy consumption, the glycogen supply will last for only around 20 miles – six miles short of the finishing tape. As I approached Lake Merced, I could feel the “wall” looming ahead.

As my brain tried to check out, I worked actively to keep engaged. I began to think about my TNT experience. I raised nearly $4,000 for those fighting cancer. This day, however, was not about them. This race was about my own battle, for I was running for those left behind after cancer’s devastating blow. 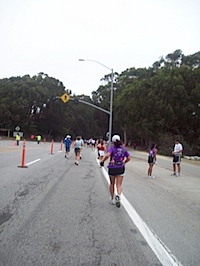 All along, my plan for this, my 13th marathon, was to have a way of fighting for my own life. Different from our honorees, I am a cancer survivor of another type. The fight is long and hard but I was determined to would prove that I would not be defeated – not during the race and not in my life.

This was my marathon: my fight. I was not going to give up. In fact, I picked it up a notch. And as I ran, our team manager, and teammates ran with me for short stints and talk me through it proving that although it was my battle, I was not alone. With that realization, I conquered the “wall” and emerged on the other side feeling awesome (although tired).

After returning the great highway, I picked it up as much as I could. The effort that I put forth felt like a sub-7 minute per mile effort, but the splits tell a different story. I was hurting but each time I started to let the pain slow me down, I grimaced and just kept reminding myself that I was a fighter. I would leave it all on the course and have no regrets.

That is just what I did. I pushed it in and arrived at the finish wobbly and light headed but feeling like a winner. Nearly crashing into the firefighters, I grasped my little blue Tiffany box and was escorted to the medical tent. While in there, I was very happy when YaYa (with Jeff, Zach, Matthew, and Ben) popped his smiling face into the tent to congratulate me. They were at the finish line all along.

I am proud to have given the race everything that I had. I earned that IV, foot rub, and 1 hour of care by warm and caring people.

Nike kicked my butt, but I kicked back and I won! Thanks to everyone who helped support me in one way or another along the way. I love you all.