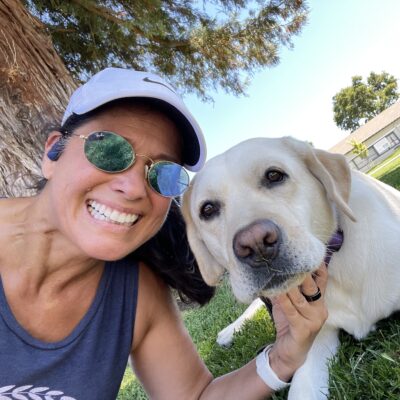 Over a year ago, when I put my puppy through intensive obedience training, my ultimate goal was to end up with a dog that I could call on to be at my side for runs, hikes, or what ever else I decided to take on. Knowing that dogs who begin running too young are more susceptible to hip issues, I didn’t push him to run with me right away.

But, I did take him hiking with me quite often. Initially, his huffing and puffing had me a little concerned. We stopped often to hydrate and eventually, I put him on a little bit of a diet to trim off some of his excess puppy weight. The vet entering “obese” on his health record also had a way of encouraging this. *sigh* Even being a little lighter on his paws, so to speak, he still tends to pant a bit more than other dogs I have had. But, all the while, my little panting dog tags along in the happiest manner possible.

When I began training for the Race to the Row half marathon, I took Kobe along for a a few of the earlier runs. I noticed that he had a tendency to trail just slightly behind me. At the time, I was struggling enough to find my own happy pace, that I opted to go it alone while I working through the roughness of beginning to run again. Then, after the race, I really haven’t been running a lot.

But, I *do* want to run regularly again. Probably, even race again. I’m not ready to commit publically yet.

As I resume my running efforts, I think about how I want Kobe to be my running companion. It occurred to me that I shouldn’t expect him to magically be good at running by my side, sticking to my pace, and going the distance. He needs to train too.

So, today, we did a two mile run together. I showed him what I wanted, gave him a few stops to sniff and pee, and kept encouraging him to stick with me. He did great! And now he is napping.

If any of you have experience on developing four-legged running companions, I’d love to hear about your experience. Please leave your stories in the comments.