It was a last minute decision to check out the weekly run event put on by my favorite local running store. Opting to that take YaYa along was even more last minute. Fortunately, he adopted a why-not attitude to the invite. In no time, we were changed and on our way. I promised YaYa that I would not abandon him. I needed to run short and “easy” as I didn’t want to jeopardize my plans for the Boston to Big Sur Challenge.

After assuring him that if he could only run 2 miles that this would be fine we fell in line with the other runners. While I was making a new friend named Lauren, YaYa was picking up speed. I wasn’t worried though. There were plenty of other runners in the group who were planning to turn around at the bridge as I had planned.

Unfortunately, those runners who were turning back at the bridge, passed us on the return without YaYa. One yelled out, “your son is FAST!” Yeah, apparently he passed them before they turned back. So now I was between 1/4 to 1/2 mile behind him and he was not showing any signed of slowing or tiring. Not only was I not thrilled about the prospect of having to chase him down, it was pretty unlikely that I’d be able to catch him. Thankfully Lauren, who not too long ago ran track in college, agreed to chase him down.

On the return trip, I asked YaYa to stick closer to us so that we would not have to chase after him again and so we wouldn’t miss the trail exit. That was the hope. However, in essence, we were still chasing after him as he had a nice clip going. We also missed the exit and had to run an extra mile on the street to get back to where we started.

My GPS read close to 5 miles by the time we hooked up with the rest of the folks — who had a head start on the free appetizers and beer. Amazingly, for someone who didn’t even know if he could run 2 miles, YaYa sure seemed to have quite a bit left in the tank at the end of the run. He soaked up the positive strokes and is eager to return for more next week.

Next time, YaYa will be hooked up with someone who runs his pace. More than likely, this will be none other than the son of the store owners — who both have a long history of Boston Qualifying marathon finishes (read: fast twitch muscles on both sides of the chromosomal tree). In addition, I will be sure to communicate ahead of time the turnaround and trail exit. 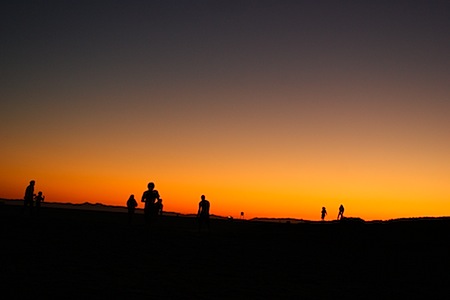 It’s also a good way to work off the turkey dinner.