I started Kobe in obedience training in mid-January. Since bringing him home, I’d been working with my young pup by accessing my prior dog training from memory. It wasn’t that he was behaving badly; it was that I’d been imagining more obedience skills than I knew how to make happen.

While I long to call myself a runner again, I also want a dog that will run by my side without issue. I mean, I don’t want to be correcting and tugging back on the leash every time we pass another dog. My young pup is >75 pounds of muscled mischief. He goes crazy with excitement anytime we come near another dog, and he uproots me from the ground I walk on with one excited lurch forward. While this may or may not lead to a few challenging hikes, it could be downright dangerous if we were out for a run.

So, we began one-on-one training sessions in a nearby park. We’d learn a few skills, then put them into practice during the following week. Our practice was in no way half-assed; we did the work. Yet, when we returned to the park for lessons, everything changed. Having other dog owners purposely walk their dogs toward you in the name of dog training (instead of doing the socially distanced passing from the other side of the street), completely changed the game. Young Kobe moved past these other dogs in a manner similar to his namesake in the final minutes of a championship game (no points earned in the process). Meanwhile, I was close to tears of frustration – wishing I’d started my these training efforts several months (and fewer pounds) earlier.

Instead of being told that he needed to go away to puppy boot camp, I asked for it. Not only would he get intensive training in the trainer’s home. He would also get a chance to socialize with a few dogs at a time under her watchful eye. We kept up our practice efforts during the few weeks before a slot opened up and he seemed to be coming around… minus a few incidents.

But in the days leading up to his departure, I started losing sleep. I began having bad dreams where my beautiful, now well-behaved puppy was stolen. The dream didn’t end there; it went on to show me just how deeply bonded I am to this dog. Last night I woke feeling the same emptiness, perhaps even more, that I’d been feeling before Kobe was born. I wondered if I’d been putting too much on him to make me happy. And I couldn’t get back to sleep for many hours.

In the morning, we had a few hours to spend together before I dropped him off where we have our training sessions. He happily hopped into her car and drove away. I was pleased that he seemed to adapt so easily. Now, it’s my turn to make the best of this time apart.

Things are looking up in the neighborhood. I suppose it is one of the things that is good about having to spend so much time in our homes; we’ve begun nesting so-to-speak (in my case, no baby is one the way). This rise in fixing up our homes only makes sense. If you’re going to spend 90% of your time in one location, you want it to be nice. Am I right?

I’ve been spreading out the costs by doing a little here and there. Painting the exterior, including the awning that covers my newly replaced deck, is next on my list. I reached out to a painter that is part of my yoga community. Rumor has it that he does excellent work.  My painter friend came out to look at my home and give me an estimate (still pending). 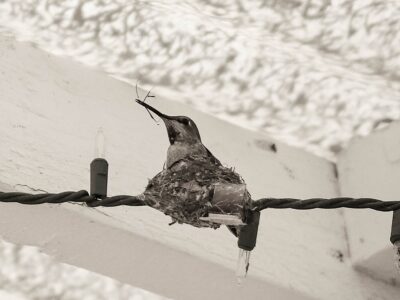 The day he came, we noticed a tiny little hummingbird nest has been built on and around the wire of the white lights which hang across the decked area. On that day, the nest was empty still. Momma hummingbird seemed to be in the process of adding the finishing touches to make it just so for her little babies. As any mom might do, she selected the softest most luxurious materials.

In looking at her handiwork, I couldn’t help but smile as I spotting a plentiful amount of fur from my Kobe. Nonetheless, I still think that my black yoga pants have more of this special hair adhering to it on any given day than momma’s nest. Nonetheless, I am happy that my puppy’s constant shedding has a benefit to someone.

Of course, you probably know that hummingbirds have a most special place in my heart. For me, they are symbolic of my, now deceased, stepfather who was known for his constant humming. The tattoo on my right shoulder is in memory of him and I always think of him and smile when I see a hummingbird.

I think it is safe to say that the painting of my home will have to wait until momma hummingbird and her babies have completed the nesting phase of their life and flown away.