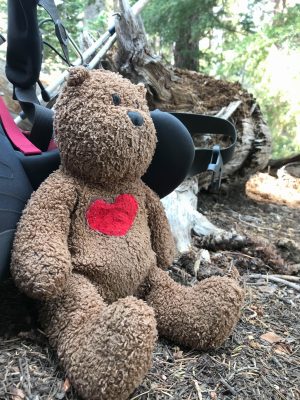 As you know, our original plan to explore the Trinity Alps was rerouted to Carson-Iceberg Wilderness in Stanislaus National Park. We checked in at the ranger station to ask for recommendations on where we could go. One suggestion was to continue driving and enter at the Ebbetts Pass trailhead where we could jump on the Pacific Crest Trail (PCT) and head out to some pretty lakes and attempt to get away from the smoke.  There were a couple of other suggestions but this is the one we chose.

An hour down the road, we were unloading our packs and preparing to get lost in nature. We each carried our own bear canister full of our nutrition for 4 days/3 nights (ketogenic nutrition for me; traditional for theMAN). Since my calorie-dense foods allowed me to take a smaller (275 cu. inches) and lighter (25.6 oz) bear canister than my compadre’s (440 cu. inches/33 oz).  This allowed for a very compact load. In contrast, theMAN’s pack appeared to be unfairly overloaded. However, neither of our packs came anywhere close to resembling that of a lightweight backer. I joked that the many thru-hikers we would meet along the PCT would probably gasp at our load when they realized we were only out for 4 days. 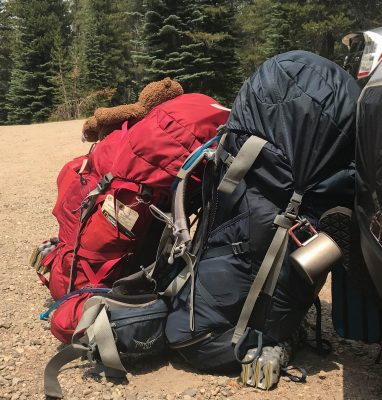 In addition to his bulkier bear canister, theMAN also carried the bulk of the shared items including the tent, water filter, stove and fuel for the majority of the trek — although I took the water filter and fuel canister on Day 2.  With ~3L of water each, our packs weighed in at 39.4 lbs. and 34.9 lbs. equating to 25-30 percent of our body weight.  Although my pack was lighter, my load was still 30% of my total bodyweight (10% more than the recommended conventional backpacking recommendation). 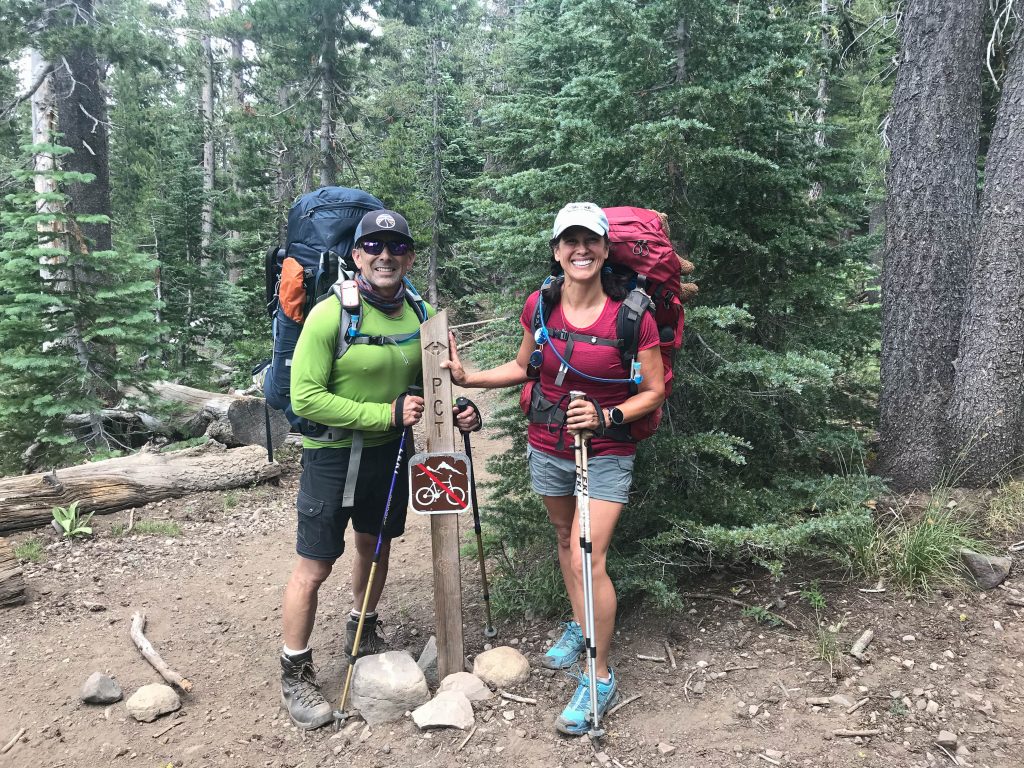 We hiked up 0.2 miles to the PCT and took the obligatory photo before continuing on. It was 2pm by the time we were trekking the PCT, yet we still entertained the lofty goal of camping at Raymond Lake. We had no idea how far it actually was as the map didn’t seem to show all of the numbers. Additionally, the map showed water sources that appeared to have been dried up for months. Needless to say, we abandoned Raymond Lake at about 5:30 pm. Having trekked for 5.67 miles, we were still unaware just how far away it was. It would soon prove to be a hard and long day. 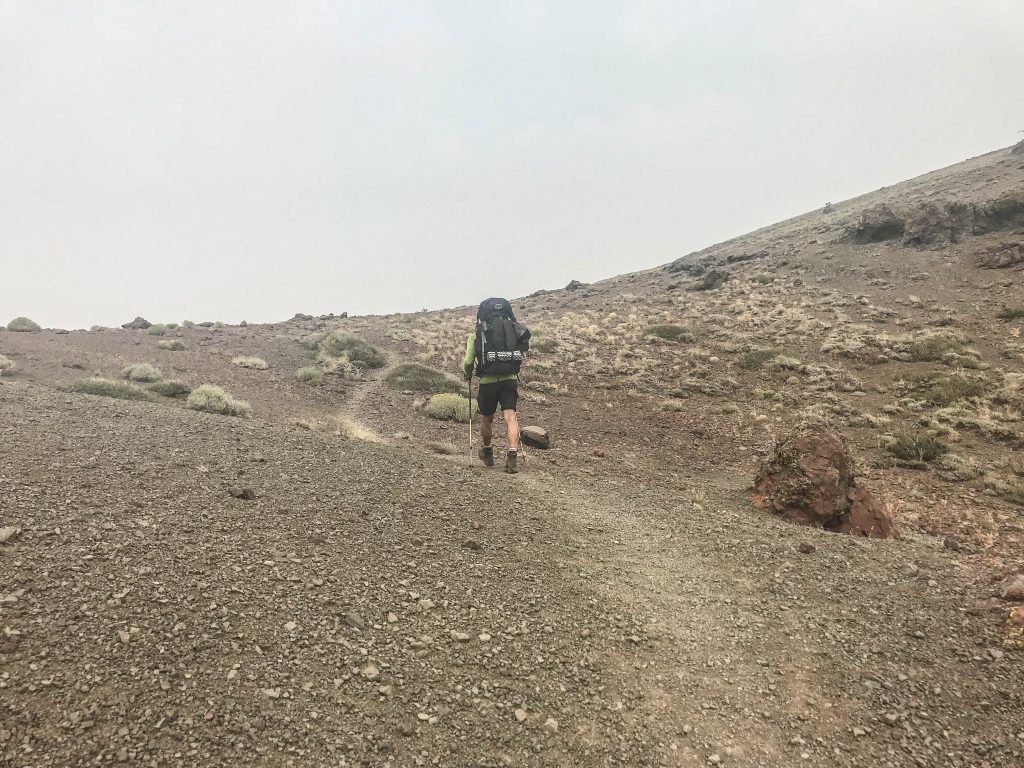 Thinking we only had 2 miles to go, the following morning we headed out around 10:30am. The plan was to establish camp, then do a short day hike for the remainder of the day. Four hours and 5.62 miles later, we were humbled and spent. So we set up the hammocks and just hung out until sundown. 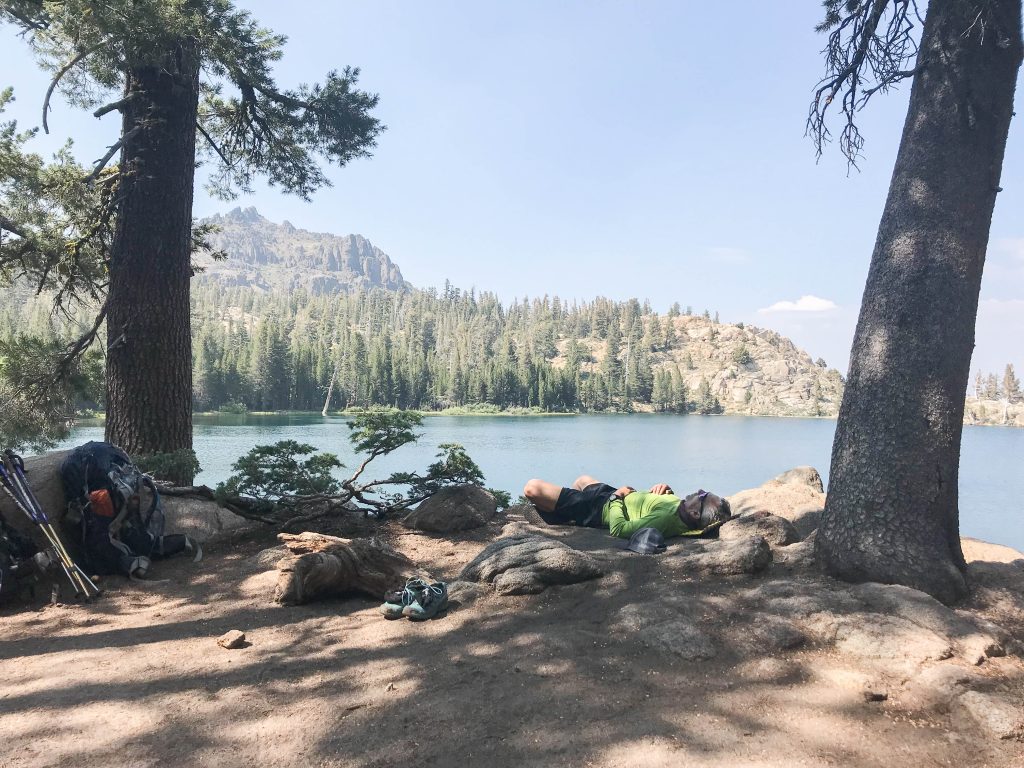 We got an earlier start, the following day. Headed back towards the car, we planned to spend the night at the lake we’d bypassed on the first day. It would be a long 8.8 miles but at least we knew what we were in for. We had lunch and replenished our water supply from our campsite from Day 1. Four hours later, we set up camp in the first site we came too.  It was the best of the lot but, to be frank, we were just too tired to carry our packs any farther. Our last day on the PCT would be the remaining 2.35 miles. 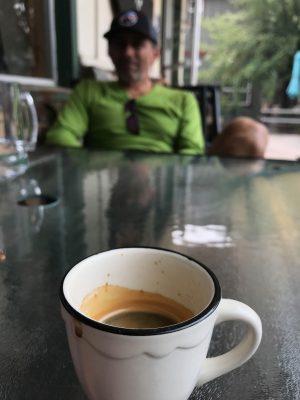 After our trek out of Kinney Lake, we loaded up the car and headed to Markleeville where we discovered the sweetest café complete with espresso, a yummy meal for theMAN, and a keto-friendly meal for me. Then we were off to our friends’ cabin in Kirkwood for hot showers, dirt-free yoga practices, a WiFi connection, and a soft bed. The following day, we returned to the ranger for a wilderness permit to the friend-recommended Fourth of July Lake.

With only a one night planned, we made a conscious effort to lighten up our loads. Instead of carrying 3L of water, he carried 1.5L and I, being the thirsty gal that I am, carried 2L. I figured that I would drink up the first liter in no time. The dropped weight equated 17% and 23% (his/her) pack weight to bodyweight ratios. 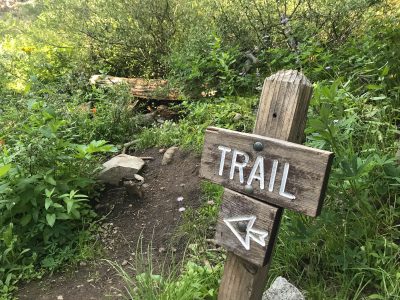 As it turned out, someone beat us to the permits for the Fourth of July Lake. After a brief moment of disappointment, followed by several more trying to come up with another option, we opted for Emigrant Lake. The trek was a short 4.47 miles to a lovely lake with snow smattered granite walls.

Once again, we were getting a late start, hitting the trail after 3pm. Early in the hike, an old man mumbled about how crowded the lake was going to be with all the people headed out there. A short time later, we ran into a party of six who had left the parking lot about 20-30 minutes ahead of us. My friendly greeting was not returned, so I stepped up my game in an newly fueled effort to beat them to the lake. I surprised even myself at how strong I felt. 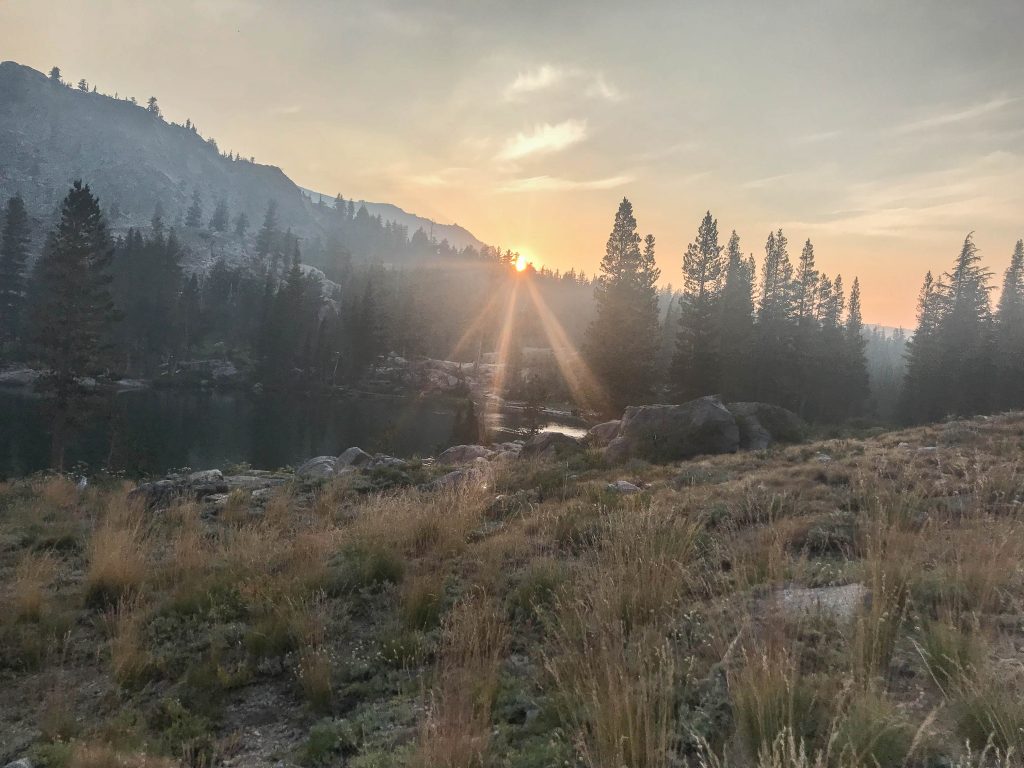 Even though we ended up beating the lot of them to the lake (as the only hiker who got ahead of me stopped to wait for them), we only saw them for a brief period of time as the combed the other shore for a suitable camp site. After that, it was as if we had the whole lake to ourselves. Apparently, theMAN encountered headlamps across the lake during a middle-of-the-night potty run. We gathered water for the morning coffee, watched the sun go down, and retired early. The short trek out was sure to be the easiest of the travels to occur on our last day.

Overall, the trip was great. I can’t speak for theMAN but I think he was happy that I insisted on persisting with the plan to backpack. Our trek was not free of smoke but in light of all the devastation going on in the mountains, we definitely lucked out.

Would I go the ketogenic path again?  ABSOLUTELY!

Prior to my trip, I had only been eating when hungry and generally only have coffee in the morning rather than a meal. On the trip, I ate when there was opportunity to do so. This meant that I ate breakfast and lunch by the clock (more or less) because I didn’t want to bypass the opportunity only to add and extra stop that theMAN wouldn’t otherwise need. I also knew the work demand was high and didn’t want to risk injury. 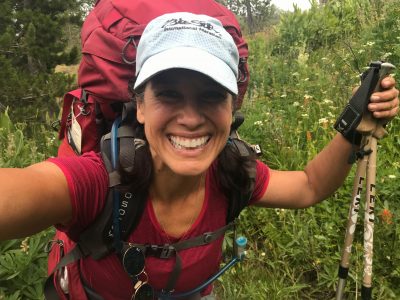 As the days passed, I was more and more comfortable to back off on my intake. For this trip, my nutrition followed a 4:1 ketogenic ratio (4 grams of fat for every 1 gram of carbohydrate + protein) so I didn’t need to put a lot in mouth in order to get adequate calories. I was never famished, and felt stronger than ever before on a backpacking trip. I am 110% sold that ketogenic backpacking is the way to go. Next time, I will make the effort to prepare a few of the more complex recipes from the Ketogenic Backpacking book I was referencing — just for the fun of it.