When hiking in the backcountry, especially on trails of a technical nature, it is of the utmost importance to keep your mind focused on the task at hand (the trail) at ALL TIMES. As the trail gets more and more difficult, muscle soreness, fatigue, and the other effects of increased altitude start to wear on you… and the mind wants to wander to more pleasant moments – such as being at the final destination.

It was Day 3 of our Mount Whitney adventure. We were making our way back to Whitney Portal from Trail Camp, where we opted to spend another night after an amazing but challenging day hiking to the summit. We woke at 4:30 am, packed up camp, and began our descent. Fueled on a Cliff Bar and a water, breakfast would come a few miles down the trail. We eyed the fatigue of the day hikers with respect for their ambitiousness of taking on the entire trek (Portal to Summit and back) in a single day – and were ever more grateful that we opted to cover the same mileage in three days time.

The trail was rough and rocky in these early miles yet I let my mind wander back to Day 1 as we revisited familiar territory. I knew better than to do this and would call myself back to the here and now when I would catch myself. Except for when we hit the spot where I’d had a melt down over my water supply running low, then completely lost it when theMAN hiked on ahead of me to scope out the water supply. I hadn’t heard him tell me what he was doing… and ALL my abandonment pictures ignited. The fact that we’d heard the news of the missing hiker having been found dead just an hour earlier certainly was having an affect on me. That was on Day 1. It was now Day 3 and I had 2 liters of water and knew there was plenty of spots to get more in the miles ahead. I came to the spot where I cried “you left me” in theMAN’s arms, and thought back to the emotions that coursed through my being in that moment: my late husband’s “deal with it” intolerance for my insecurity when bumping up against fear, and my dad driving off with his belongings stuffed into his VW bug the day we were told of the divorce, and how, in spite of his promise to be there for us, he was NOT.

Yes, I let my mind wander. I didn’t see the rock until after my foot tripped on it, my ankle rolled, then my other knee landed on it. THAT brought me right back. With well over four miles left to travel to Whitney Portal, there I was sitting on the ground, writhing in pain. It was NOT GOOD. 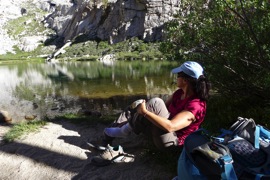 I looked up at theMAN, there at my side (as he had pretty much been for the entire trek). I was not alone; I could do this. I stood up slowly and began again, feeling strong and capable after my downfall. I’d be okay. I put one foot in front of the other and, thanks to a little physical discomfort (aka pain), I did not let my mind wander off task until theMAN and I were safely off the trail.