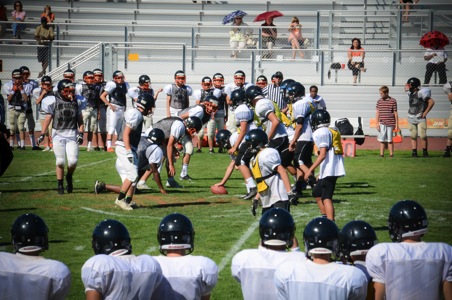 YaYa is now playing of the freshman football team for his new school. He’s on the Freshman team and is loving it. I love the way it has gotten him involved at his new school right from the start. He’s made a lot of new friends and is really making an effort to manage his time wisely, taking advantage of his free periods, so that he can keep up with the homework load.

The official games don’t start until next week, but today we had a scrimmage against one of the other local high schools. It felt odd to not have to get him to the field two hours ahead of the scheduled game time for weigh-ins. With this change comes the awareness that football is a whole different thing without the rigid weight requirements to keep the boys safe from harm. Not only that, since one of YaYa’s new positions (at least for the time being) is center, it means that he has a good chance of colliding with a big guy each and every time he takes his place on the line: front and center.

Did I mention that I originally signed YaYa up for tackle football thinking that he only wanted to play because his big brother, BoBo wanted him to play? It’s true. I was certain that he’d hate being hit. Of course, I was wrong about my son. He loved the conditioning, the sweat, the yelling even. And he loved HITTING. He loved it so much that he didn’t mind the sacrifices he had to make even when he had to give up sodas and eat more salad to “make weigh” the first year that he played down a level as an “older-lighter.”

Time has really flown by; I can’t believe that my baby is already in high school…or that 4 short years from now, he will be graduating and [hopefully] heading off to college. Precious are these years (albeit challenging). This is why I am bummed that I will need to miss most of the mid-week games. I just hope that YaYa will remember how I was there for nearly all of his pop warner games and know that I would be there for ALL of the games if I could. And of course I pray that he will always come home safe.