I have been absent from the yoga studio for nearly a week now. Absent from Mysore, yet not completely distant from my practice. I took Friday off, and enjoyed an extra hour of sleep. It followed with a few sun salutations (Surya Namaskara A and B) and some seated meditation. On Saturday and Sunday, I hit the practice full force and felt that I’d made real progress. “Boy, won’t my teacher be happy to see that I haven’t completely ignored my practice”, I thought.

Then I got a visit from Aunt Flo. The second one this month. I’m lucky, I guess. In the yoga world, this calls for a rest day as the thinking is that ashtanga stimulates an inner fire and creates an upward movement of energy. During menstruation (yes, that’s what I’m talking about), the energy should be moving down and out.

Feeling like not only had I been moving along in my practice, but also that I had been getting a nice handle on my back/hip issues, I was not embracing the prescribed rest. I did an abbreviated practice at home on Monday and found that I was down and out the following day. Ugh!

There I was, Tuesday morning at 6:30 am, sitting at home on my mat meditating on whether or not I should return to Mysore, spend yet another day of abbreviated practice, or rest. My change of clothes were in the car, and my lunch was packed. I was dressed but NOT ready to go. I felt like such a fraud. Ashtangi? How could I call myself an ashtanga when I could not decide whether or not to practice.

But I didn’t rest either. Instead, I did yet another modified practice

wasting away 30 minutes feeling guilty about skipping my practice. And sadly, my body was becoming more stiff and sore than before.

So this morning there was no Mysore practice at the studio. I was bound and determined to do what I would have done if there had been. I stepped to the front of my mat facing eastward and begun with the opening chant. The practice that followed was difficult at best. My body was stiff and my mind was weak. It was all I could do to keep my movements timed with my breath. At one point, I caught myself arguing about whether or not I needed to go to the bathroom. In the end, I forged on, determined to stick it out until I ran out time or energy.

I was in Janu Shirsasana C (a pose where your toes, the plantar surface of the foot, and hip are put into a challenging position) when my phone began to chime. I didn’t even need to look to know that it was theMAN calling as the ring tone game him away. “I can’t stop now”, I told myself. “I won’t come back.” And so I let the call go to voicemail and continued on, proud for only a second at my ability to stick it out. Then, once more fighting the urge to stop before my chosen targeted stopping point.

I was humbled. Indeed, I was humbled. My vinyasas, in between seated postures, were nowhere near the fluid movements designed to string the postures together that they were just days before. I laughed at the thoughts I’d previously entertained about my teacher being happy with me. Another lesson in attachment, I guess. Each day is different and it does no good to be attached to a level of fitness or achievement for it too will likely pass. I’m sure you have found this to be true in your other sports. I certainly have found this in running.

I did my best to just give it my best. Breathe: IN…and OUT, IN and OUT…

Until, it was time to finish up. I crawled off my mat (not literally), and into the shower. And I thoroughly enjoyed the feel of the hot water falling on my sore, worn out body. I did it!

Lord only knows what tomorrow will bring.

This morning, I opted to linger in bed a few minutes longer in lieu of my daily meditation. Telling myself that my ashtanga practice would be serve my meditation needs, I honestly thought it wouldn’t matter. So I sat in bed, sipping my espresso while theMAN sat on his tuffet (zaffu cushion) meditating.

Before long, I was showered, dressed, and eating. I gathered up clothes for work and packed my lunch for the day: chores I should have done last night. I felt somewhat skilled for managing to pull it all together with a few minutes to spare. I said goodbye to theMAN who was now doing something other than meditation in the office space that adjoins my bedroom. No response. I said it again and waited. Nothing.

I peaked in to see what he was doing that prevented him from saying goodbye. It was unlike him. He was in the middle of his morning pushups. “Oh-kay.” I murmured, as I walked away. I was a little put off that he couldn’t even say goodbye to me. He stopped his pushups and came over to kiss me goodbye. I could tell his was puzzled by my impatience and then realized that he didn’t even hear me.

I left, went to yoga, and then to work – not giving it another thought.

Then I glanced over to my desk phone to check the time. Upon seeing the day of the week, I realized that I would not be seeing theMAN until after the weekend. *sniffle* END_OF_DOCUMENT_TOKEN_TO_BE_REPLACED

As we fell back into savasana, our final resting pose of the practice, the lyrics from James Taylor’s “You’ve Got a Friend” played on…

Hey, ain’t it good to know that you’ve got a friend? People can be so cold.
They’ll hurt you and desert you. Well, they’ll take your soul if you let them,
oh yeah, but don’t you let them.

The final thoughts just before settling in fully revolved around the awareness of being spirit and therefore best friend to my body. The words played in the background as I sent this friendly message to the areas of my body, noticing the areas that could soften and the areas which remained so tight the breath had difficulty penetrating.

A short time later, after the OMs, I rolled up my mat and left the studio filled with a satisfying sense of peace in knowing that I had made friends with myself. Oh, yeah, yeah, I’ve got a friend. 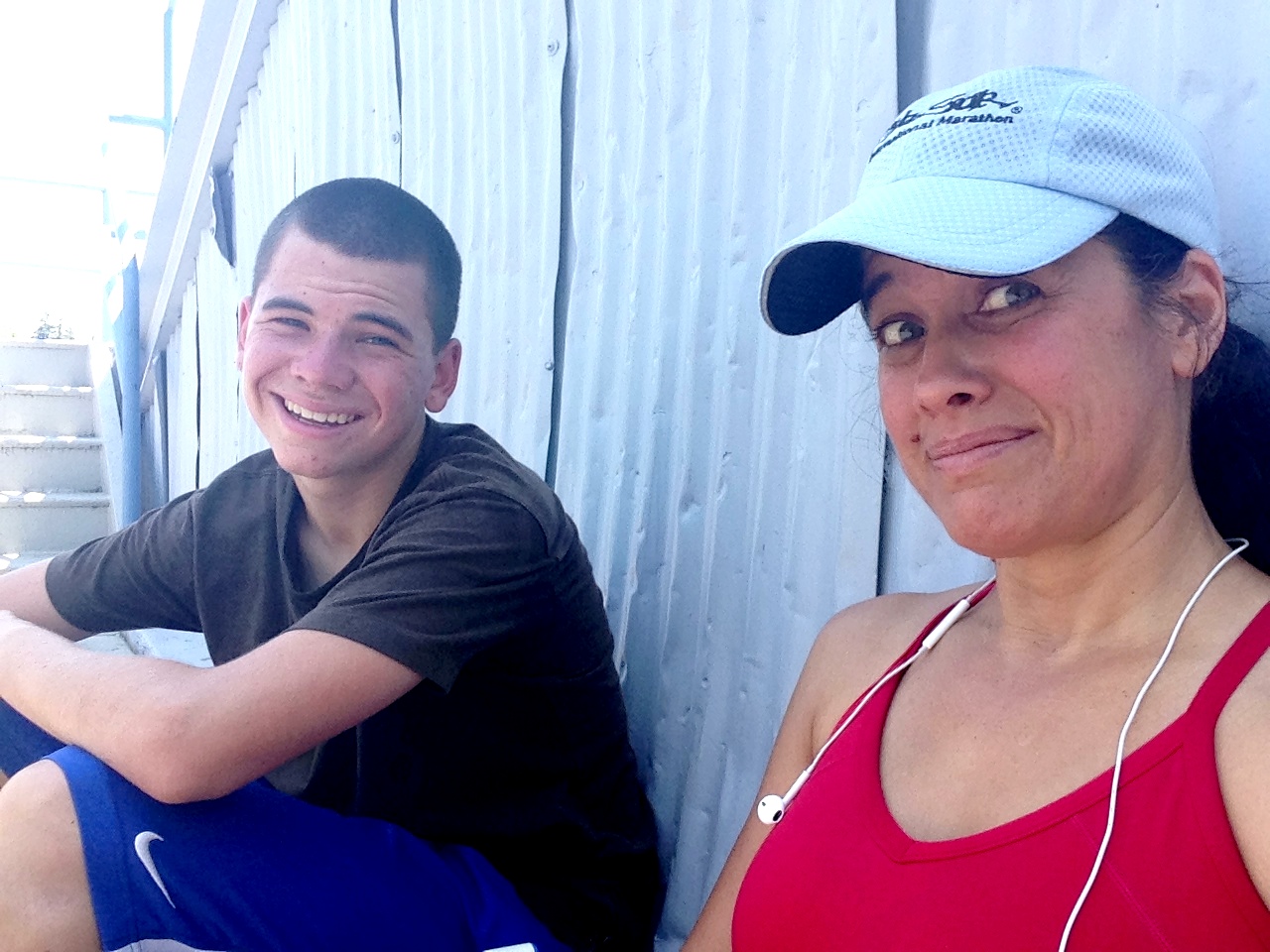 I recently read an interesting article about yoga’s potential benefit to the stress response of the brain. I use the word “potential” because not everyone who is doing yoga is actively practicing being calm and mindfully present at the onset of the discomfort that yoga will often induce. Despite my own efforts, I am not always about to achieve this – but I try.

This morning’s mysore practice, for example, was difficult long before I arrived at the studio. Honestly, had I not messaged my instructor beforehand, I might have returned to the warmth of my bed. Since I had already committed however, I had to show up.

And show up, I did. The room was already packed, with 20+ ashtangies already into their practice, when I arrived. I rolled out my mat, took my place at the front of it, and began. My body S-C-R-E-A-M-E-D with DISCOMFORT right from the first forward fold. Ugh!

In the past, I would have listened to that voice telling me to GET. OUT. OF. THERE. – but not today. Physically, I showed up; I couldn’t back out now.

I did my best to stay with my breath but found, all too often, that my practice was wildly out of sync with my breath. I tried to connect and, when I did, it got easier. Not easy, but easier than initially.

It’s a process and everyday I come to my mat is different. As long as I don’t expect to be where I was the day before, it’s okay. Good even. But if I show up expecting it to be better than the day before, I risk being disappointed. I am finding that it’s better to just show up… and let what happens, happen.

I am finding that this approach is a good one for life as well. END_OF_DOCUMENT_TOKEN_TO_BE_REPLACED

I attempted my first mysore asana practice this morning. Unlike an instructor lead ashtanga practice, mysore is self-paced and therefore the focus is directed inward. While everyone takes on the same sequence, in this case the primary series, each yogis’ journey is vastly different.

The instructor circulates the room, offering assistance in helping each yogi achieve the posture to the best of their body’s ability. For me, this was much further than I ever imagined my body could go. It was transformative and very encouraging for it gives me hope of what is possible — albeit far from easy.

As I practiced, I observed my body go from waking-up during the initial phase to becoming somewhat beaten down in the middle of my practice. I kept on moving through the sequence, noting how my body was so fatigued that my upward dogs had become cobra and my hop forward had dwindled to nearly a crawl. Then, midway through the seated poses, something amazing happened. My hop gained height and I was able to return to upward dog without shaking. I was still tired, but at the same time I was also energized by the practice.

The whole mysore experience was quite a process which is obviously much more than just the physical. Erika, our instructor describes the practice as a “mirror for the mind.” I think she’s right.