Take a look at this picture of the map which is located on the sign as you enter the road to parking lot. Notice it is handwritten! That’s because I am the first to post such map on the INTERNET (even Big Basin’s own site) for unassuming folks like me whose poor navigational skills have her heading off in the wrong direction. *sigh* 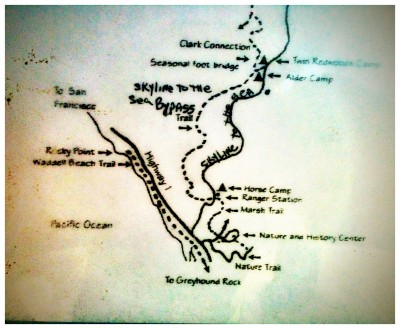 Okay, so maybe I still could use a little guidance from theMan… just a little. Okay, maybe A LOT! I’m feeling a little more pathetic and a lot less happy-go-lucky right now. *BIG HUGE SIGH* In the meantime, perhaps it is time to read that little book navigational skills that I purchased in Kings Canyon.