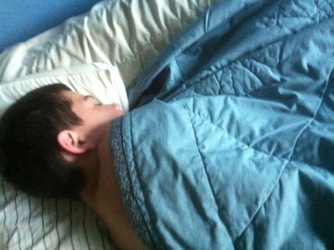 Memories of the newborn stage have made their way into my awareness. You remember the stage. Right? The days of sleeping when they sleep — or risk forgoing any sleep at all.

Back then, however, sleep was met with silence. In the here and now, YaYa’s sleeping is met with coughing and whimpering. YaYa does the coughing (CONSTANTLY), while I do the whimpering. Every night this past week, I stumble down the hall at night to find my baby is burning up with fever and, quite possibly, it is too early for a dose of acetaminophen or ibuprofen. We are BOTH worn out.

It’s been 7 exhausting days of this and things are getting worse as the days go by. At 2 am, YaYa’s temperature was 103.4 degrees fahrenheit. I gave him a dose of ibuprofen, some cough medicine, and sent an email to his doctor. The waiting is over; it’s x-ray time!

Some time  later, his x-ray confirmed a case of right lower lobe pneumonia. YaYa got drugs (antibiotics) and a nice little talk from his pediatrician. Taking my side, his doctor told him that Mom’s attempt earlier in the week to perform chest percussion therapy (CPT) was definitely a good idea. He stressed that as the antibiotics begin to work, the mucus in his lungs is going to move around. When this occurs, it is essential for YaYa to get it out rather than letting it settle elsewhere in the lungs. His pediatrician also warned that things could get worse before they get better.

I had YaYa take his first dose of antibiotic in the parking lot. Then, we went home for a little CPT, TLC, and SLEEP.