“Sometimes your only available transportation is a leap of faith.”
~ Margaret Shepherd

It was early in the morning and I was feeling a little apprehensive about my planned 70 mile ride. A recent modification in my planned long ride progression changed the weekly increments from 5 mile increases to 10 mile increments. It seemed doable except I hadn’t really riden 60 miles in fell swoop. My 60 mile ride was spread across 2 days. Remember? I wondered how my body would handle the planned distance.

I was wasting time on FB and Twitter, trying to find the needed motivation to help me begin my ride. It was the quote above that got me thinking. Faith, eh? Could it be as simple as having enough faith in myself that would allow me to pull it off — regardless of the prior distance? I knew the answer. I just had to prove it.

I rode down the expressway to my mom’s house. Riding past the high school, elementary schools I attended, the streets I played in, and the neighborhood pool where I spent half my childhood is something that always lights up memories. I met up with Bill, my mom’s new hubby, and we rode off into the cool morning air.

We took the roads less-traveled and some traveled a-little-too-much along the foothills from city to city to city. Similar to traveling through the neighborhoods near my childhood stomping grounds, these roads conjured up memories as well. There was the neighborhood where I rented my 1st apartment, the roads I cycled in my early 20s, and the neighborhood I lived in my senior year of high school (when I could no longer stand to live with my parents for reasons I cannot remember any longer). 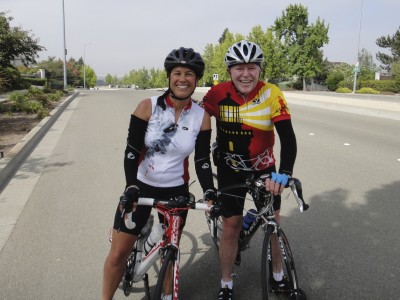 Just before the midway point in the planned 50 mile segment with Bill, we hit a large section of road being resurfaced. Feeling a lot like a jelly bean in a glass jar that is being shaken, I wondered how much worse it would feel on a metal bike. It was not fun. By the time we were through the rough stuff I was quite shaken. “Do we have to go back that way?” I asked.

Fortunately for me, Bill knew an alternate route. It was not as pretty, did not have a designated bike lane in portions, and ended up shorting us 6 miles by the time we returned to Bill and my mom’s home but the resurfaced streets were avoided.

With over 53 miles logged, I felt surprisingly good. I asked for ideas on how to extend my remaining 9 mile ride by 6 additional miles. I sent on my way with a little route sheet to refer to as I was venturing into unchartered territory.

Homeward bound, I traveled down a familiar old country road then turned right for a short climb past the relatively new country club on the hill. The homes were big and beautiful here, but that didn’t last long.

Before I knew it, I was riding through a part of town that I avoid even in my car and wishing I had not chosen to pull my hair back into braids. I did my best to stay relaxed, and tried to think about the quote on faith.

It wasn’t long before I was making my way out of the ghetto and turning onto a well-traveled highway — for a short jaunt. The police car making the turn with me, helped to calm my nerves as I stood idle for the first time since leaving my mom and Bill and patiently waiting for the light to turn green.

And with that, I went to church.