With the doctor’s blessing, I rolled out on my bike for another cycling adventure. This time, it would be just the man and me. As a result, he was able to provide me with the perfect combination of encouragement and critique. He managed this no matter where he was, be it at my side, a good ways ahead of me, or with his hind quarters just out of arm’s reach.

There was only one time where I was able to get ahead of him (not that I’m complaining) and that was the result of failed communication. With plans to turn back at the top of the last hill, I slowed to let him return to the road where he’d been waiting. Upon hearing him yell “[muffled words] GOING!” I picked up the pace again. Of course he meant keep going, I thought. If I were to insist on stopping to catch my breath, that would only prove weakness – which I  am most certainly NOT.

A minute or two later, I hit another hill and my man was had still not passed. Sure that he was gaining on me, kept on not daring to look back. If he wanted to pass me, he could do it with little to no effort at all. I had no doubt, at this point, that he was trying to see what I had in me. I didn’t know how long I could hold it but I’d do my best to show him. I turned up the effort as much as I could.

Minutes later, he rode up along side of me. “Where ARE you going!” he asked. Puzzled, I pointed to the road ahead. Reminding me of the plan to turn around at the last hill, he repeated his question. I shrugged my shoulders, “Uh…there’s a really BIG hill up ahead. I was sure you meant that  one.” He just smiled.

On the return, we were greeted with a fierce headwind. I locked myself on to the man’s back wheel, tried to be a small & aerodynamic as I could imagine, and peddled as hard as I could manage. This time, I would not be taking the lead.

Back at home, I filled up the cooler with something iced cold (per my doctor’s orders) and headed outside. 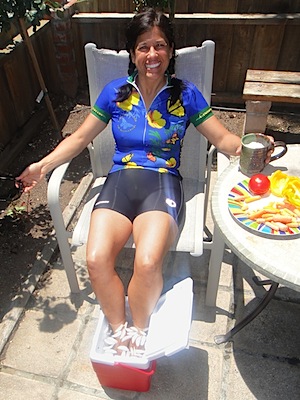