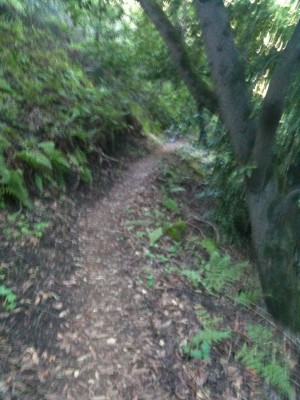 As more and more time passes where life’s little happenings keep me from my marathon training, worry builds up. I’d be lying if I told you that I was confident that my training was finally going to get going. This just wasn’t so. In fact, more and more, I was waiting for the other shoe to drop so-to-speak.

On Saturday morning, I noted how NOT ready-to-run I was feeling. I tried to go through the motions but felt apprehensive and unmotivated. And I nearly rescheduled the run for the following day simply to be able to go with my cute male companion for the bulk of the miles. That was until we began talking the logistics of running on Super Bowl Sunday. Our planned parties were already dictating our end time and therefore limiting our run locations. I decided to go it alone.

I drove out to the Ranch for a scenic bit of trail running. Shortly after heading out, I found my groove. I ran on and on..until I’d finally hit my targeted turn-around point. Before turning back, I decided to detour off the main path and stretch on the hillside just up the little path to the right.

I stretched briefly and then suddenly, as if a blindfold had just been removed, I noticed a beautiful expanse of unexplored trail. You could say I’d found a little slice of heaven on earth. So, I decided to run just a wee bit more.

…until I was standing beside a little creek at the bottom of the hill.

And then, I ran back. I arrived back at my car, tired and thrilled that I was still capable of going long.