Taper. It’s maddening. It makes you do crazy things…like eat an entire bag of kettle corn in one sitting, wait until midnight to start taking pictures obsessively, and purchase another pair of Vibrams.

Technically, it’s all Donald’s fault. He wrote this awesome review of Vibram’s running-specific footwear called the Bikila. Months ago, I wrote off this particular Vibram based on looks. Ttranslation: the color schemes were not in affinity with my world.

Not only is the newest color scheme in affinity with my world, it’s matchy-matchy with the Boston Marathon’s world.

And my feet? Well… 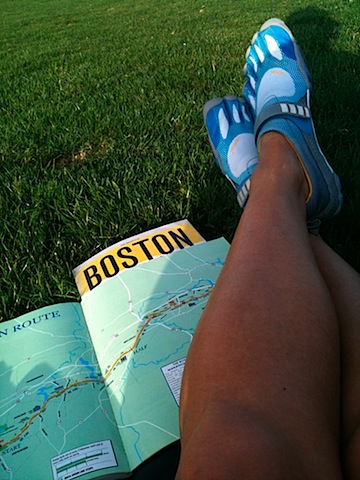 I was hesitant to run at all as my wee toe suffered even further assault after Sunday’s run when I kicked the VCR accidently while vacuuming the house. I’ve been wearing my Teva sandals ever since. The part of me that had to know if the newly acquired bikila’s truly were the non-abrasive and soft to the skin footwear that Donald noted.

I started out cautiously and, with ever step, I winced just a little as my wee toe touched ground. Less than a mile later, the pain subsided and I was running with ease once more.

The feel of the ground below my feet was somewhat different as well. It’s difficult to describe but the Bikila’s pods make the ground-under-foot provide a smoother feel than I’ve grown accustomed to running in the Treks. It also felt like my foot was landing differently in the Bikilas than how it lands wearing my Treks. It felt like my foot was more flattened out versus landing more on my toes. This may have nothing to do with the changed footwear and everything to do with my tender toe.

Anyway, I’ve got 4 paved miles logged and will log another 13 miles leading up to my 16 mile long run. Hopefully, I’ll know 100% that the Bikilas are my footwear for Portland. And as for my Treks, they’ll have plenty of use — on the trails.

Post run, I inspected my feet, then kicked back at YaYa’s football practice and celebrated by looking through the Official Program from the 109th running of the Boston Marathon (which my friend Natazha gave me in 2005 to inspire my BQ).

This phase of training is a little maddening, but it’s kinda cool too.