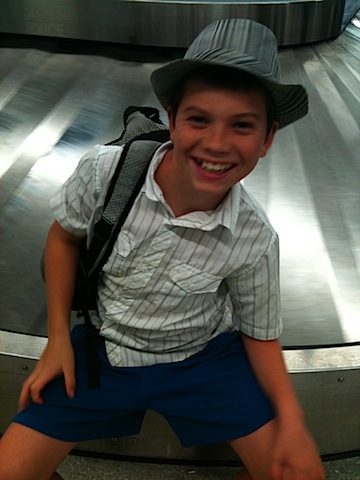 After waiting for over two hours for my son to return from his trip, off from the plane came a young man who looked a lot like my YaYa. The only problem was that he spoke kind of funny saying “bonsoir momma” and asking if I could cook him up some escargot. My mouth must have dropped open with the who does this kid think he is kind of look.

It turns out, that this boy actually was my YaYa. While vacationing in France, he’d learned a thing or two about good food and the finer ways of living. He says that lobster is really good, and that he likes veal, and lamb too.

As for chocolate croissants, he thinks he’ll take a break from them for a while — since he’s been eating them for breakfast for the past two weeks.

And as I heave-ho a suitcase that has gained considerably in weight, I wonder just how much weigh my young man has gained. He’ll still need to meet Pop Warner weight requirements. I’m afraid to look.