Between YaYa’s birthday happenings, the reunion, and multiple football activities, the scheduling of this weekend’s long run was a bit challenging. *sigh* What’s new?

I prepared for an early start on Saturday and began the preparations the night before. I mixed up my Perpetuum, laid out my run wear, and planned my route. Then I rose early and began tracking miles right from my front door. 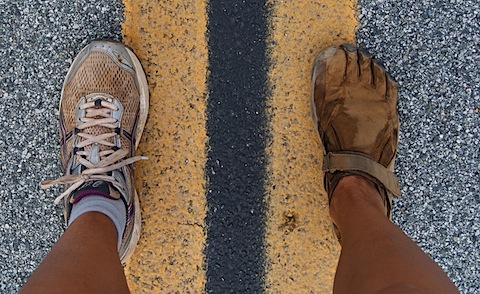 I headed out on pavement in the direction of the trails. Four and one-half miles later, I was a million miles away, climbing hills and stomping dirt. I ran a 5 mile loop and, although I wanted to continue, I headed back home. I wore my VFF for these 14 miles.

Then, after taking YaYa to his pre-game warm ups, I resumed my run wearing my Asics. The difference was like night and day.

Although I allowed a break between the VFF portion f the run, the transition was still awkward. My legs felt heavy and powerlessness. Additionally, I was ever aware of the increased thickness under my heel — which must have an effect on overall body alignment. I made adjustments and told myself that for a short 5 mile run, I could handle being in traditional running shoes. Then, I counted my blessings for being able to successfully run 14 miles in my VFF.

And even though my calves are sore and tight once again, I believe that 7 hours in high heels, 4-5 of them dancing, is the more likely cause. I’m encouraged.