I’ll be so glad when this whole making-weight for football thing is behind us. Initially the challenge was in finding creative ways to make fulfilling meals while restricting the much-loved rice, pasta, and bread. I got creative with my salads and branched out a bit (just a tiny bit).

Now that we are so dang close to the certification, poor YaYa is weighing himself after every little action. I get calls reporting his weight after actions such as taking the dog on a run, taking a poop, and eating. Unfortunately, he is not obsessing over eating. The boy simply forgets to eat unless reminded. Even then, it might not happen. 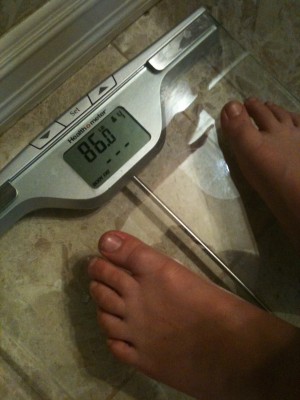 Yesterday, when he called up crying that he couldn’t find the string that keeps his practice pants up or the butt pad, I discovered that he’d only eaten a yogurt and an banana. It was 3:30 pm! While I remained on the line, I sent him into the kitchen to eat ANYTHING.

Somehow he pulled himself together and made it to practice with a stable psyche again. This was good because when Coach Yells A. Lot expressed his unhappiness, then told YaYa to “get with the program” or something of that nature, I was about to have a meltdown. But YaYa held it together.

This morning, YaYa’s weight is ever so close to right on. I had him lace up his running shoes and we headed out for a 2.5 mile run.
Whether or not he gets there, it won’t be for a lack of trying. And when it’s over, I’m going to hide the scale.