While swimming laps, I glanced over to the next lane just as another swimmer glided past. Moving through the water appeared to be effortless. I watched him flip turn at the wall and come back in my direction. I turned away and resumed my focus on the pulls until he was far enough ahead to not notice my attention.

At the wall, I fumbled with a wall turn. I silently cursed the hand paddles and leg buoy and hoped the guy in the next lane didn’t see.

As I continued to observe, I found it clear that 100’s were going on in the lane beside me. The guy stopped at the wall for a short while before resuming his workout. As I stopped to drop my paddles and buoy, I was relieved to see that he was staring at the clock. Whew!

I gulped down a few sips of gatorade and pondered the next part of my workout. I was inspired by this guy’s focus. Taking a big breath, I glanced over at the clock and pushed off just as he was approaching. Doing my best to focus on my own stroke, I began psyching myself up for a flip-turn attempt. I quit doing them some time ago when I was failing to get over nicely.

Gasp, stroke, stroke, turn, push. Not great, but not too bad. I pushed off and continued on picking up speed as I went. Before long, I was at the other wall. Psych, gasp, stroke, stroke, funky turn. Oh shoot, where is the wall? The guy in the next lane was approaching quickly. I found the wall and pushed off. I wondered if he saw my feeble attempt at turning.

The good part, was that no matter what that thing at the wall was, I somehow managed to push off and continue on with my workout. I decided to let it go as long as I could find the wall and resume my stroke. I continued on, sometimes flipping, often times flopping.

END_OF_DOCUMENT_TOKEN_TO_BE_REPLACED

This here gong is at the office waiting to be hit. Unlike in the 1980’s Gong Show, hearing this gong sound is a sign of a good thing. We are only allowed to hit it when a new patient is enrolled in our clinical trial. 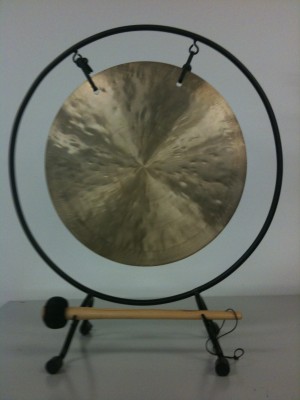