I think that dogs know when their time is coming to a close. They try to tell us but we don’t want to believe what we are hearing. We don’t speak the same language after all. But last night when Lucky barked repeatedly even though he didn’t seem to need anything in particular, while Ronin whined and paced the house, I knew that something was going to happen. 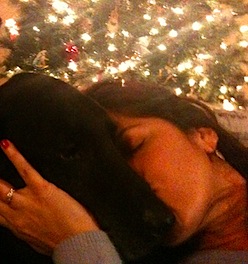 Somehow, even a rodent or poop on the carpet would have made me happy. This was because I knew that it was only a matter of time before I’d kissed my dear dog’s nose one last time. And if it was to happen, I wanted to wake up to find him peacefully and forever sleeping in his crate. But that wasn’t how things went.

Instead, I came home in a rush to leave town for the holiday. My friend have been given a key and instructions. I only wanted to check on the dogs before I went. Why? I don’t know exactly. Or at least not consciously.

At home, I grabbed a baggie, let the dog out of their run, and began “tidying up.” Lucky came in to see what was keeping me and I petted him but stayed on task. Then we all went into the house and that was when it started.

Lucky began gagging, then foaming at the mouth, stumbling, and collapsing. In an instant, my plans had shifted. I called BoBo to fill him in on the details. Fortunately, YaYa had already described the scares that we’ve had all too often lately. Minutes later, I had Lucky in the car and we were en route to his vet.

They had a room ready for us with a blanket lining the lowered exam table. Lucky climbed right on. I signed the papers, and waited. Those few minutes seemed like forever…

I stayed with him during the procedure. I stroked his head and held him after the medicine was administered. And I slobbered tears all over him afterward. As many of you may already know, it was very difficult having to make the decision to “put my dog down.” I’ll tell you this, my husband would have given anything to have had the same luxury in the final days of his illness.

I have yet to leave on my trip. I’m taking my time I guess: being with my Ronin and processing it all. I really wanted Lucky to hold on until BoBo could see him again and say good-bye to his dog. But, I guess that wasn’t in the cards. Maybe that would have been harder. We’ll never know.