After careful review of my various playlists, I selected “purchased songs” for my long run entertainment. If you haven’t done this in a while, you might be surprised what crops up. I have an odd collection of songs downloaded for various moods, projects, and family members. My collection ranges from an eclectic mix of everything from Classical to Country, Jazz to Rock, and Christian/Gospel to Disney. I forbid myself to skip songs so it made for an interesting run. 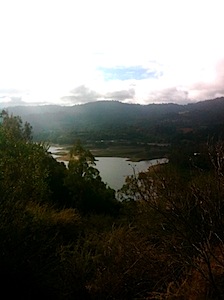 As usual, my mind wandered off as I traveled. I found today’s daydream much easier to handle then yesterday’s trip to the ICU (as the patient). In todays, I was watching a video of me as Coach and I approached the finish line in Santa Barbara. In my dream, he is filming and we look up at the clock to see a certain Boston Qualification. Of course, I am ecstatic. I cry out and cheer and make a scene that only I am capable of making. It is awesome and it is a dream that I hope to make happen.

As I run, my mind lets this daydream play out and I enjoy the taste of success as the miles tick away. I wave at the people I pass and am pleasantly surprised that they are returning the greeting…until about 10 am. Then it all changes.

My greetings are suddenly returned with blank stares as if I am invisible. I don’t like this but I keep moving. I have a mission and I am nearly half way.

Upon reaching the top of my climb (nearly the half way mark of my run) I stop to take in the view and preserve it with a photo to share it with you. Another runner, named Bill likes the idea and stops to take a picture too. We chat for a few minutes, exchange phones (no numbers) to take pictures for each other and are soon on our way. But before he leaves, I open my mouth noting that the running group he has just mentioned being a part of is not very friendly. “They never say hello” I note.

It’s only after I leave in the opposite direction that I entertain thoughts of him emailing a photo of me to everyone in his group with the instruction to not ignore me but to trip me for saying such mean things about their group. What was I thinking?  I should’ve staying in my daydreaming mode; it’s safer. 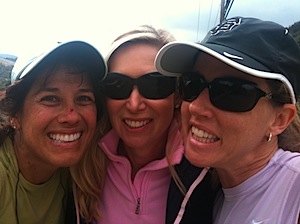 The thing is, the unfriendly running group did not need to trip me. I do that well enough on my own. Coming down the damn dam wall, I did a swan dive followed by a face-plant. Gravity still works, folks!

I sat on the ground in a daze as a small crowd of people gathered around me. If this wasn’t a case of déjà vu, I don’t now what is? I swear it was just like this when I fell on the treadmill. “Are you okay?” they asked. “I think so.” I replied. I couldn’t be sure.

I asked for help up and felt a sudden rush as all signs of blood flow to my brain disappeared. I reached for a nice woman’s arm and allowed her to help me to the nearby bench. I called for a ride to my car.  As the dizziness subsided and the burning of my hand began, I began the mile walk into town.

My new friends Diane and Kristi stayed beside me the entire way — making sure that gravity (or the unfriendly running club) didn’t try to take me down again.

I have many scrapes and bruises but mostly my ego is bruised.  I feel like such a klutz and need to make that good in my own mind.  So tomorrow, if my body (and gravity) allows, I will head out again to payback my balance due.