On Sunday night, I sat outside with my 8 year old niece watching the other kids play basketball and escaping the World Series hoopla. Another thing I was escaping was Big Sis being strongly “encouraged” to make herself more attractive for her husband (via make-up, hair styling, and dying her hair) less he leave her.

In spite of the well intentioned delivery, I have to think that Big Sis received it as a slap in the face — much like her sending me an article to solve my “getting fluffy.” If I know my sister, I’m sure she’s rightfully thinking that staying fit is the best way that she can preserve her beauty as well as her mind. And, if he doesn’t love her “as is,” then who the heck needs him anyway. Okay, that last part was 100% me.

Outside, I sat with Big Sis’ youngest daughter talking sports and school while I let her play with my iPhone. I let her play the whopping TWO games I’ve installed on it, showed her FB and Twitter, and then demonstrated how Midomi finds songs by singing Sing and Part of Your World. And she was SO impressed — not with the app but with her Tia Juls. 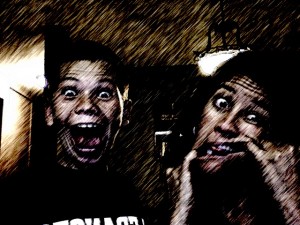 Then my dear niece scanned my photo collection and came upon a series of photos of YaYa and I goofing off for PhotoBooth. She stopped at one of the photos and sighed, saying “I wish YOU were MY Mom.” I was immediately uncomfortable — more so than IN the house. How could she say such a thing? While I just cringed, my niece went on to say that I was “cool” and “fun.”

On the way home, I reflected on the Juls of yesteryear and the me of today. Indeed I am not the same person. YesterMe hardly wore make up, never dressed up, and didn’t own a stitch of lingerie. Married to a man who thought women that dressed in that fashion had to be “on the prowl,” I naturally avoided anything remotely similar. It’s funny to think that Big Sis’ in-laws are now encouraging it as a necessary evil. For me, it was foreign…until my husband died. Now, I reach for a bit of make up and color for myself rather than to catch a man’s attention (although I wouldn’t complain if that happened too).

As for “cool,” Big Sis definitely falls into my definition of cool having been spot lighted on numerous occasions as an elite or semi-elite triathlete. She also coaches Masters level swim workouts, and is leader for her daughters’ Girl Scout Troops. If that isn’t cool, I don’t know what is.

Still…I guess for an 8 year old, a mom who has Miley Cyrus songs in her iTunes collection, aspires to learn the Hoedown Throwdown, and takes goofy pictures with her son might seem pretty cool. What she doesn’t see is the mom who drops her son off at daycare at 7 am each morning, misses all of his flag football game (except tomorrow’s game which I will I might see if I claim to have an “appointment”), serves up way too many frozen meals for dinner, and gets drunk all by herself on a Wednesday night just because she can.

Maybe someday she’ll see just how cool her own mom is.  And maybe someday I’ll be as cool as she thinks I am.