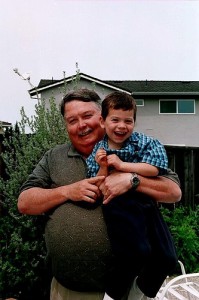 My step father, known to my kids as “Papa,” is largely responsible for this blog. It was during the initial days following his sudden death that I discovered writing. Initially, it started with the task of writing something to say at his memorial: a story or poem. I discovered a voice within that wanted to let stuff out — a way of screaming without waking the kids. I began writing in a journal, in my work notebook, on napkins, or what ever was handy.

Then one night, while searching the Internet for something which I cannot recall, I found an article about blogging and runners. I found RBF, and I found the courage to start a blog. I would blog about running and journal my personal life elsewhere. That was the initial plan.

But it didn’t take long for me to find ways of folding the two together, until finally my blog became all about me. I doubt I’d be blogging today if it weren’t for this transformation.

As you well know, I do a lot of my soul searching right here. I put A LOT out there, but there has been somethings which I have held back…

It’s been 4 years now since Papa’s death. 4 YEARS! This past week, the emotions have been raw — as if his death were yesterday.

Of the 3 parents that I have, Papa was the one who was ever-present in our lives. He gave of himself and without expectation of anything in return. He gave us, his step children, more love than both of our birth parents gave collectively. He was young and had so much ahead of him.

He was a wonderful man who should NOT have died. It doesn’t seem fair.

I guess that’s the point. It’s just life. Life isn’t about fairness. We were lucky to have had him in our lives at all. We were blessed. Right?

The 1st year that followed Papa’s death was filled with much anger and hurt. I remember riding the waves of sadness… until more loss of love and loss of control shifted my attention. Although I have hardly mentioned Papa in my writings of late, it isn’t because I’ve forgotten him.

In fact, today Lil Sis and I will get together after work and do something in his memory. Perhaps we’ll take the kids miniature golfing (he loved golf) and then to one of his favorite restaurants. It doesn’t much matter. It’s just a way to signify that we haven’t forgotten, haven’t stopped loving him, haven’t stopped missing him each and every day.

You see, I didn’t want to include my mom in our little event because I didn’t want to be further upset by her way of grieving (perceived by us as not grieving at all). I want only to forget that she moved on to the next marriage in record time. While I should be finding some understanding for her moving on, I can’t seem to.

I realize that it is not my place to judge. There is no right path for grieving. There is no proper timeframe for moving on and finding a new mate. If there was, I am sure that my Support Groupies would point out my deviant timing for I am the first and only one to enter the dating world. And I wonder if my judgement towards my mom’s moving on affects my ability to do the same in a guilt-free manner.

In as much as I truly believe that my husband would have wanted me to find a new mate and be happy again, surely Papa would have wanted the same for my mom. Perhaps it is time for me to forgive her for doing what I so badly want to do. After all, to forgive is to be free.

Perhaps she too is awake right now missing Papa and weeping his loss.