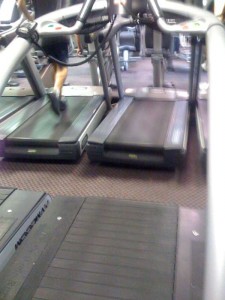 I loading up my workout bag with hopes of escaping for a mid-day run on Friday. That was before I remembered my therapy appointment — which lasted 1 1/2 hours. Subsequently, I had not been at work very long by the time noon rolled around.

But, later in the evening, I found enough time to retreat to the gym for a quick run on the treadmill. YaYa waited in the cafe with a plate load of eats while I faced my treadmill demons. Unless you count brief jogs, such as from inside YaYa’s school to the MommyVan (when we were late for baseball), this was the run since falling on the treadmill.

I figured on a bit of apprehension but was truly surprised at the level of fear that I encountered as the belt got moving. I had chosen a different model with the hopes that it would be easier. Instead, the unfamiliarity created a huge amount of uncertainty.

Just as the beast was beginning to get a move on, I reached for the safety tether. Accidently knocking the connection free, I discovered that this treadmill does not gradually come to a stop — it stops on a dime. With images of me face-planting into the front of the machinery, I was NOT at all comfortable with this.

Fear heightened, I ran along at a speed of 6.0 mph. During the entire 1st mile, my right hand held the side rail. Into the 2nd mile, I released my grip intermittently. That was only after slowing to a walk and take deep relaxing breaths between miles. My heart rate was in the high 170s to low 180s. By the 3rd mile, I was running hands-free once again.

Mission accomplished — somewhat. I expect it will be easier next time around. Still, I think my next run will be outside.