Can you believe it. It’s pouring down rain and my 7 year old is out playing a baseball game! The rain stopped by the time I returned from home with a sweatshirt for under his uniform. Then I had to practically wrestle him to get it on. And he was soaking wet.

Now, the final score of the game tonight was 19:8 and *we* had the 8 but the game was GREAT anyhow.

Picture this:
It’s the last inning and the other team is at bat. The bases are loaded. Our pitcher has hit his pitch maximum (40) and there are two outs. They call YaYa (MY son) to the mound.

As he is warming up, the pitches are going wildly ALL OVER. I hear the other team’s 3rd base coach say to the runner that “it’s a good thing that there is a 5 run rule.” 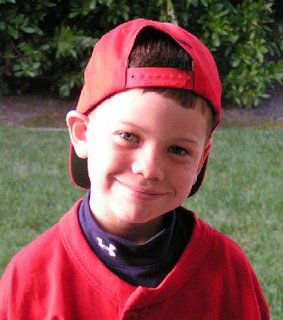 “Hey dude, that’s *my* son your mocking.”
1st pitch: STRIKE. THAT shut him up.
2nd pitch: STRIKE. Yup.
Then… just to keep him guessing, YaYa throws 2 wildly high pitches followed by…
a high pitch that DROPPED… right. ..into the strike zone just as the batter moved out of the batter’s box. Hah! STRIKE
BTW, YaYa is one of my most loyal readers so, since there was no running today anyhow, *this* post is for YaYa.