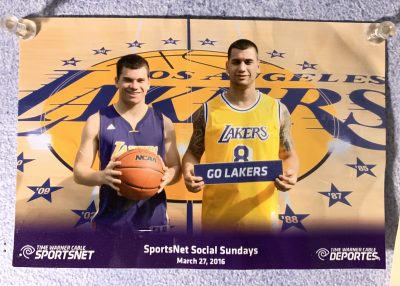 After an intensive weekend of numerous yoga workshops and teaching, I returned home to find my boys in an emotional funk like no other. It should have been obvious that both of them were wearing their jerseys representing Kobe Bryant’s basketball career spanning high school through retirement. But not be me. BoBo finally blurted out that I should check the news, social media, radio, or anything — for clearly I’d been in airplane mode.

So, I reconnected with the world outside of the yoga and discovered the tragic news of the helicopter crash taking nine lives including 41 year old Kobe Bryant and his 13 year old daughter, Gianna.

There really are no words.

Back in March 2016, BoBo asked for tickets for him and YaYa to see Kobe play at Staples Center during his final NBA season. This postcard was a souvenir from that game.