Last summer’s trip to Kings Canyon National Park was one of careful evaluation of the messages my body was sending and constant modification. Each day, I woke with a Plan A and Plan B. The outcome would depend upon what my body would allow. I remember feeling disappointed and frustrated. I felt bad that I was hindering the expectations that I set for the trip with theMAN. Not being good enough, strong enough, and tough enough is definitely not big on my list of qualifications. A fellow yogini/hiker likened the process as similar to the yoga practice; you do what you can but modify when you need to.

Yet, the trip ended up being wonderfully fantastic. Our modified plans allowed us to take in the sights around each place we set up camp. We were able to practice yoga each day, take time to journal, go for picture walks around camp, and got plenty of rest.

With this summer’s adventure a little over a month away, I am already assessing the need to revise the plan. Set aside the fact that I have not hiked as much as I would have liked, the biggest issue this year may be the amount of snow on the ground where we have our wilderness permit. I have been doing a little research (reading blogs, updates from the rangers, and even emailing them) and are now exploring other options. Unfortunately, with the dates falling on a national holiday, the options are limited.

Once again, it’s time to go with the flow. To be honest, I am not going to get all hung up on the perfect trip. Recent events/hurdles set in my path have made me take note of what is most important to me. Count your blessings. Say “I love you” often, and mean it. Go with the flow.

TheMAN and I had a few hours to kill — sacrificing only a few hours of sleep — while in the desert. We made our way to Joshua Tree for a look at the landscape. 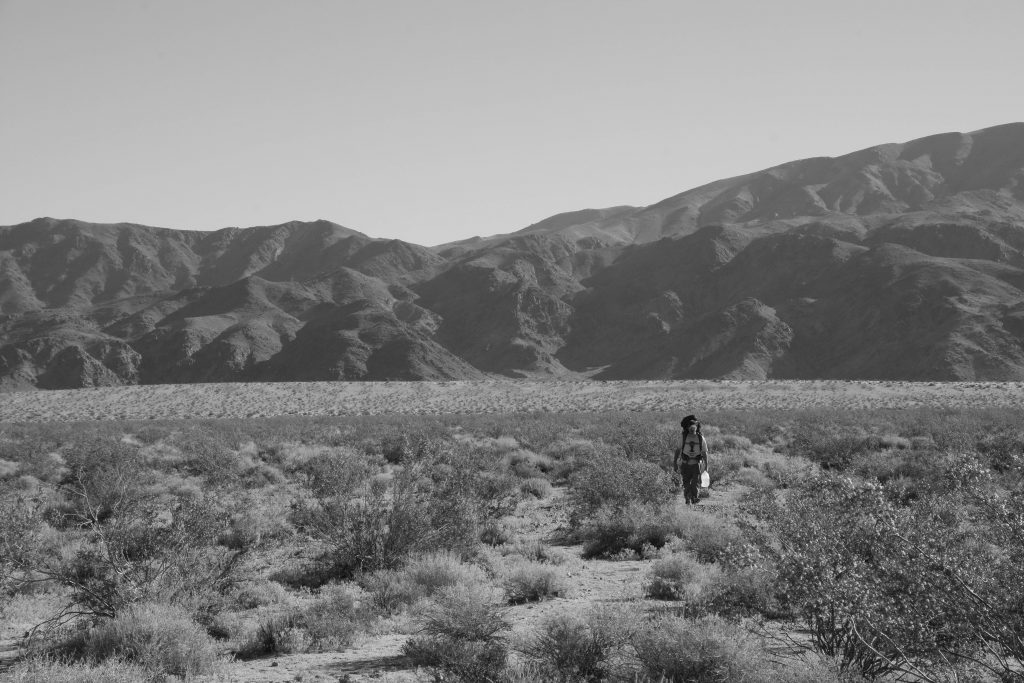 While we were out and about, we caught a glimpse of this guy returning from an overnight trek in the backcountry. It was about 8 AM and nearing 100 degrees already. The heat didn’t seem to be a problem. Maybe it was the result of being able to get away from the hustle and bustle of life but this guy was really laid back. So much so, that I’ve already looked up the requirements for getting a backcountry permit in Joshua Tree.

When the minister said, “you may now kiss the bride”…. 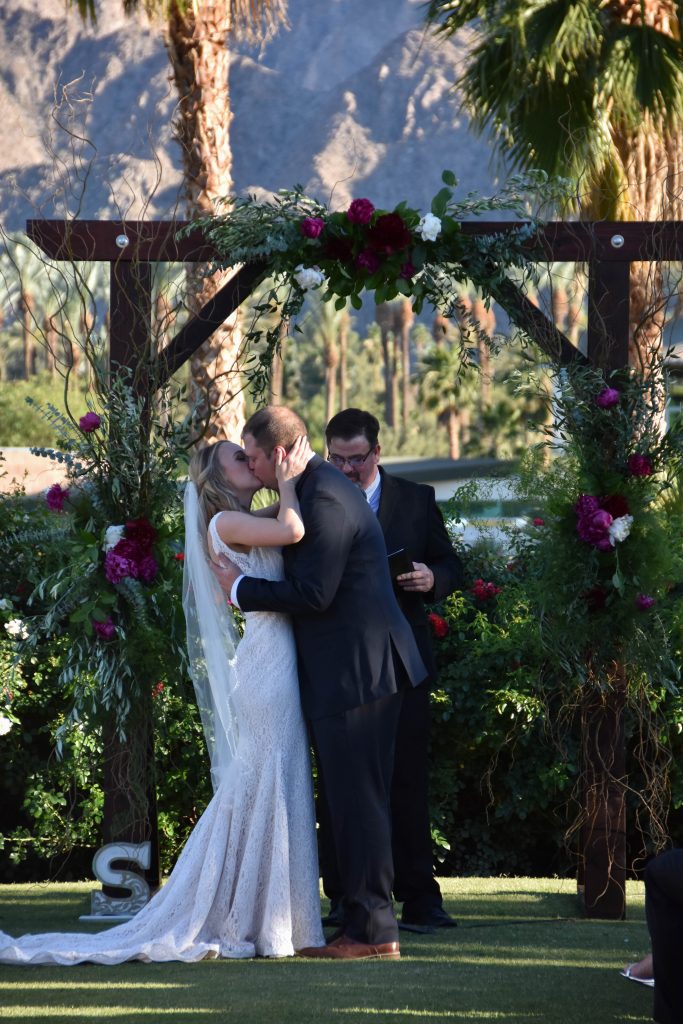 the kisses that followed were so sweet and filled with joy that everyone watching felt the love too.

My niece’s desert wedding renewed an old interest in braids, twists, and other artistic yet unconventional hairstyles. Just days before the event, I stumbled across a handful of photo galleries featuring boho themed desert weddings. I fell in love with the colors, flowing fabrics, outdoorsy feel, and HAIR.

Although I wanted to show up with an elaborate braided updo, I didn’t have enough time to research the how-to and master the skill.  Instead, I left most of my hair down with sections from the front pulled back with braids that joined at the back. So, I pretty much looked the same as I always do.

The bridal party really brought it home with these beautiful boho hairstyles. 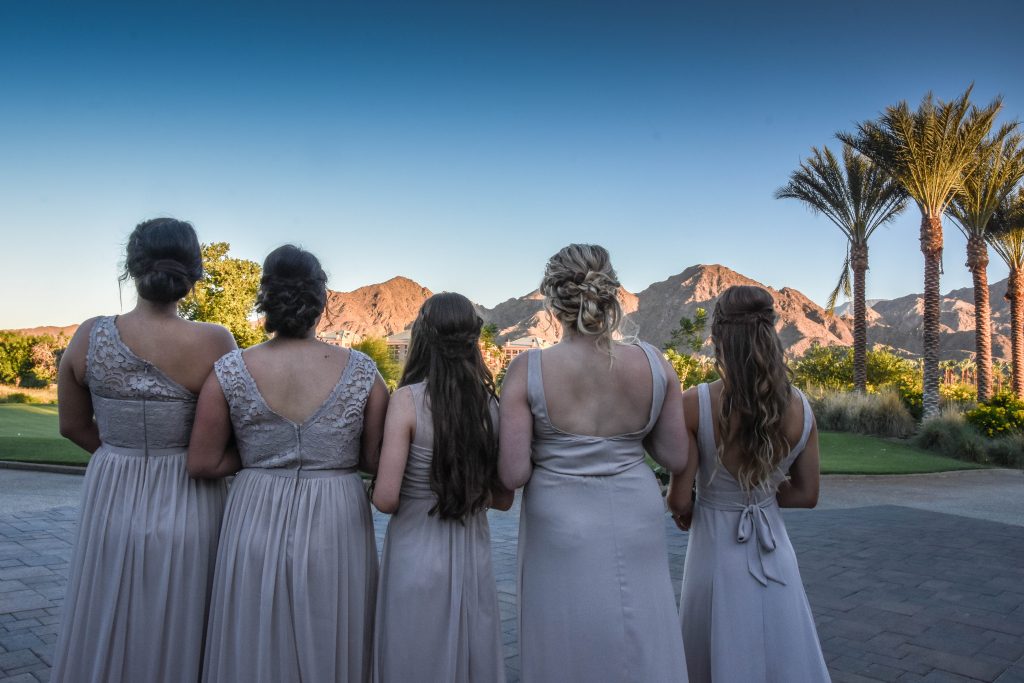 Over the last couple of years, I’ve sort of let my guard down on keeping the dogs reigned in tightly. It’s pretty common to play fetch with them in the front yard. They are generally so into the game that they don’t pay much attention to the passersby. If it’s just me, I may call the dog closer to me when I see a dog walker coming close – just to be sure they don’t run over to greet the dog and get hit by a car in all of the enthusiasm. Simba is friendly but way over enthusiastic. Ronin, on the other hand, is nearly blind. So I don’t trust them in this regard.

There are times when unknown persons linger in their parked cars in the dark of the night. It often appears that they are waiting for to buy drugs or some other up-to-no-good activity. My oldest generally walks over to their car, bangs on the window, and shoos them away. For this reason, I often leave the front door open when I take out the trash, allowing the dogs to follow me out so long as there aren’t any late night dog walkers out. Such was the case last week.

I was home alone cleaning up after dinner and decided to take the trash out. If the boys were home, I might have asked them, but they weren’t and I did not want to wait until they were. So I grabbed the trash from kitchen and the bin full of the recyclables. Simba followed me out and immediately went for his ball. I told him “no” and had him sit & stay by the courtyard opening while I did my thing at the garbage bins. There was nobody in sight.

While I fumbled with the recycling, a woman came into view. She was a couple of houses away and a similar build to the neighbor who lived in the house she was closest to. She hollered over and I waved thinking it was her. Simba continued sitting until she yelled “DOG!” In his typical excitement, he bolted over in her direction. This was when she started screaming and sat down in the middle of the street as if she was being attacked. Except Simba was still in transition. That was when I realized this was NOT my neighbor.

I dropped the can and ran over but the dogs were now in a tussle. Although Simba’s tail was initially wagging, I couldn’t tell if it was friendly play or not. They screaming made me think it was not but I couldn’t be sure since she had screamed from the very start. Just as I was nearing, the interaction turned to fighting. Simba pulled away and I grabbed Simba his collar and backed away. Then Ronin wandered over, blindly trying to assess the situation with his nose. He was clearly not attacking but the woman started swinging forcing me to bring Simba closer to grab Ronin and pull him away. I yelled, “He’s BLIND and NOT doing anything wrong.” “He should be on a leash!”, she yelled back. I said nothing; I could not dispute her complaint.

Adrenaline pulsating through my entire being, I pulled the dogs toward me house. I was petrified that she would sue. I yelled at Simba as he wiggled in his usually enthusiastic way.

I roared at him:

I was pissed at myself for not closing the door behind me, or at least the gate. I was pissed that the garbage was full, making me feel as if I had to take the trash out myself. I was pissed at the woman for not turning in the other direction when she saw a dog off leash – as I would have done. I was gushing blood from my big toe all over the floor and couch. UGH! If that wasn’t enough, I was all wet. What the heck?