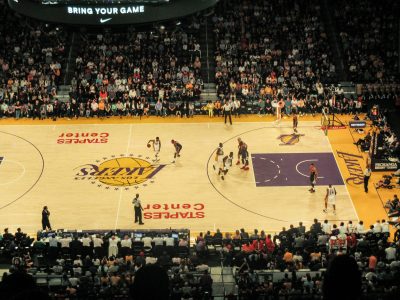 For his 24th birthday, BoBo wanted to see Kobe Bryant, his childhood hero, play at Staple Center. He really wanted to see the final game but the tickets were insanely expensive for that game. Instead, I treated him and YaYa to the game against the Jazz.

I found this photo of the game showing the view from their seats which they took with my camera that day.  The game wasn’t nearly as exciting as that final game where Kobe finished off his basketball career, but not until he’d scored 60 of the 101 points. Nonetheless, I think the boys were thrilled to have had the opportunity to see him play one last time.