I asked if there were no rattlesnakes in the canyon as it seemed that it would be difficult to keep an eye out for rattlesnakes while moving at such a rate. I was told that there most definitely were rattlers in the canyon but told that they don’t attack unless they feel threatened. That wasn’t reassuring; I keep my eyes a little more open so that I didn’t threaten any unsuspecting snakes.

Apparently, the rattlesnakes in the Grand Canyon are PINK! I find it fascinating how animals can make such adaptations in order to blend in. I wanted to see it…kind of.

The opportunity arose when we were camped at Cottonwood Creek. I caught wind of the rattlesnake sighting but decided I’d rather not see it myself. A little bit later, after a few of my trekking companions talked about how cool it was that it was pink, I changed my mind. 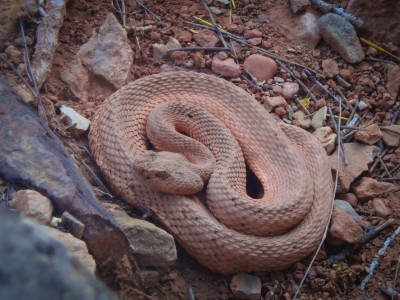