I am still trying to make my come back as a runner. Those days of waking up eager to get out the door for a long run are nothing but a vague memory. Instead, I have to remind myself that I have the Nike Women’s half-marathon on the books for mid-October. The course is hilly, and paved. Toeing the line without adequate training would NOT be a good thing.

It was noon by the time I got myself run-ready and was out the door. The heat of the day hit me like a sledge hammer on my head. Ugh! It was all I could do not to return to the cool house and switch to Plan Y.

I thought back to the good old days, when just putting one foot in front of the other would eventually result in finding my groove. It was certainly worth a try.

What I found wasn’t exactly a “groove” but it was some version of momentum, albeit slow. 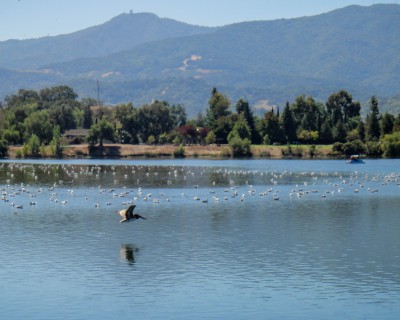 Although it took a while to get there, eventually I was able to see beauty all around. I stopped briefly to watch this large pelican fiercely flap his strong wings, lift off, and then soar almost effortlessly over the water. It was something I could relate to. And it was so very beautiful to me.